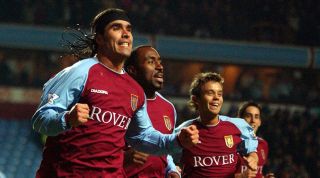 Best: Andrey ‘now in Kazakhstan’ Arshavin tailed off so dramatically at Arsenal that the only possible answer is Andrei Kanchelskis, two-time title-winner with Manchester United and purveyor of skills that didn’t actually get him anywhere.

Worst: Surprisingly, only eight Russians have played in the Premier League. So, while he wasn’t awful as such, and indeed scored a pair of beauts against Manchester United and Portsmouth, we’ll pick Diniyar Bilyaletdinov for doing little to justify being the third-most expensive signing in Everton’s history at that time.

(Who wants to make themself a hero?)

Best: With respect to Ahmed Elmohamady, it’s hard to look past Mo Salah, isn’t it?

Worst: West Brom’s signing of Al Ahly’s Ahmed Hegazi last year was an unexpected stroke of genius, so in January they went double or quits on centre-backs plucked from the Egyptian leagues. Ali Gabr came in from Zamalek to keep Hegazi company, then made zero appearances as the Baggies were relegated.

Best: Gus Poyet deserves an honourable mention, and our winner’s controversies make him a less honourable one - but Luis Suarez, with his incredible goalscoring season of 2013/14 and pathological hatred of Norwich, is the Premier League’s best Uruguayan import.

Worst: A cavalcade of crap includes Charlton’s Omar Pouso and West Ham’s Walter Lopez. King turd, however, was Newcastle loanee Nacho Gonzalez, who inadvertently caused Kevin Keegan’s resignation. In the subsequent tribunal, Keegan claimed he’d been signed by director of football Dennis Wise against Keegan’s wishes and entirely on the basis of YouTube videos, which does also explain why Newcastle also paid £5m for a cat playing a piano.

Best: Cristiano Ronaldo, one of only two players in the past 50 years to win the Ballon d’Or at an English club.

Worst: Yes, Bebé is the obvious answer. But, on the basis of having his loan cancelled after a single 20-minute cameo in which he tripped over and gave Thierry Henry the match-winning goal – his first in English football – Southampton’s Marco Almeida takes home the prize.

Best: This is a tough call. For us, David Silva edges it, ahead of David de Gea, Cesc Fabregas, Xabi Alonso and, for the sake of top-six balance, someone from Spurs. Nayim?

Best: The underrated gem – in his Coventry days, anyway – that was Mustapha Hadji.

Worst: If only for rivalling David ‘99 Premier League appearances?’ N’Gog in embodying how Rafa Benitez’s Liverpool squad wasn’t quite good enough, it has to be Nabil El Zhar.

Best: Of the three, let’s go with Ashkan Dejagah of Fulham, because he isn’t Andranik Teymourian.

Worst: The Guardian, New Year’s Day, 2005: “Newcastle spent £8m yesterday on Rangers’ Jean-Alain Boumsong, a defender no other club was trying to sign.” That pretty much sums it up – and if anything it got worse from there.

Best: Is it Harry Kewell? Is it Mark Viduka? No! It’s Mark Schwarzer, the only non-Brit to make 500 Premier League appearances, and ranked seventh overall.

Worst: It could be Aston Villa’s uncapped Socceroo Jordan Lyden, whose four Premier League appearances comprised 16 goals conceded and one scored – when he was off the pitch. That was standard for 2015/16’s Villa, though, so our pick is Jason Davidson, signed by West Brom after the 2014 World Cup, only to be murdered by Tony Pulis for the crime of being a full-back (he’s not Pulis’s only victim in this list, either).

Best: Who else but Newcastle’s Nolberto Solano?

Worst: Being back-up to Brian Jensen is not a good look, though to be fair to Diego Penny, two appearances in Burnley’s goal represent his entire career outside Peru.

Best: Peter Schmeichel, hands down. Which they rarely were.

Worst: So dodgy was Cardiff's club-record signing of striker Andreas Cornelius in 2013, his purchase ended up costing the newly-promoted Welshmen £9m and contributed to the sackings of manager Malky Mackay plus head of recruitment Iain Moody (although later events would reveal that to be a good thing). He’ll have forgotten his six-month spell in Wales now he’s with high-flying Atalanta and in Denmark’s World Cup squad.

Worst: It’s tempting to select Mauro Boselli, which is something no Wigan manager said when the striker arrived for a club-record fee, scored zero league goals and stayed on the books for three years. However, Santiago Vergini ‘wins’ because (i) a clause in his loan contract forced Sunderland to give him a two-year deal when they escaped relegation, whereupon he never played for them again; and (ii) he did this.

Best: Eidur Gudjohnsen set the career path for Gary Cahill by leaving Bolton for Chelsea en route to Barcelona. The forward’s mature performances made it easy to forget that he was a mere 21-year-old from the second tier when he arrived at Stamford Bridge. Our runner-up is Gylfi Sigurdsson, for developing an underrated all-round game (he often plays in the middle of a 4-4-2 for Iceland, you know) and having the middle name Thor.

Worst: For making four league appearances in 18 months before having his Wolves contract terminated two years early, it has to be Eggert Jonsson.

Best: Although he peaked after leaving the Premier League, Luka Modric blows his Croatian competition out of the water here.

Worst: £5.8m was still a big transfer fee in 2001, especially for a 22-year-old striker still playing in his native land. Aston Villa paid the readies, gave Bosko Balaban eight brief substitute appearances in the Premier League, then shipped him back to Croatia on loan when he didn’t score and released him for nothing soon after. Fine work all round.

Worst: Blessing Kaku. Sam Allardyce’s signing of the midfielder featured in an investigation into possible corruption, all so that Kaku could play one game for Bolton.

Worst: “Don’t expect me to perform magic right away,” said a 31-year-old, 31-stone Branco upon joining Middlesbrough. Well, he certainly made those pies disappear, etc.

Best: If the recently-relegated Xherdan Shaqiri seems an undeserving ‘winner’, consider that the best alternatives are Stephane Henchoz and Valon Behrami. Shaqiri it is.

Worst: The only Swiss player with a Premier League winner’s medal. Huh? Well, Gokhan Inler left behind regular football with Napoli to take on Esteban Cambiasso’s mantle at Leicester, only to watch from the subs’ bench as his new team won a historic title with N’Golo Kante, Danny Drinkwater and even Andy King getting the nod in midfield ahead of him. Inler played in just five league games and lost his place at Euro 2016 as a result.

Best: Something of a cult hero for his exuberance and unusual style, Paulo Wanchope also scored 50 goals and assisted 21 more across 156 appearances for Derby, West Ham and Manchester City – an excellent rate for those clubs. Somehow he’s still only 41.

Best: It’s a toss-up between a pair of title-winning walls of granite separated by three letters. We’re picking Nemanja Vidic ahead of Nemanja Matic because his aura gave Manchester United a psychological edge even before kick-off. Plus, he’d win in a fight.

Worst: Liverpool’s Milan Jovanovic, even if one of the writers on Neighbours was a fan.

Best: It could be Mesut Ozil or Jens Lehmann; it could be Michael Ballack; it could be Robert Huth. But none of them commanded lasting respect from fans of other clubs in the same way that Jurgen Klinsmann has done.

Worst: In 2009, West Ham paid a club-record £9m for Savio Nsereko and gave the forward from Serie B a contract lasting four-and-a-half years. He saw out the half, at least.

Best: Nine Mexicans have played in the Premier League; Javier Hernandez makes up 48% of their combined appearances.

Best: Of 61 contenders, Freddie Ljungberg is Sweden’s Premier League king. Zlatan’s not reading this, is he?

Worst: West Brom gave Markus Rosenberg 33 appearances in all competitions and the striker scored zero goals. But he also donated the contents of his house to charity when the Baggies terminated his contract, giving away so much stuff that it had to be spread across three Sue Ryder branches. “When we’d finished, there were just the beds left for them [Rosenberg, his wife and his two children] to sleep in,” said Tracey Evans from the hospice care charity. “They offered us a 20ft trampoline but we had nowhere to put it.” Good man.

Best: Yes, Park Ji-sung was very useful to Manchester United. No, he was not a better player than Son Heung-min.

Worst: With his six minutes of Premier League football at Crystal Palace, it’s Jonathan ‘no, it’s my brother you want’ Benteke. Last season he played half an hour of Oldham’s relegation season in League One. Still, he’s only 23 – onwards and upwards.

Worst: On talent alone, Wahbi Khazri is the Premier League’s best Tunisian (of the five). With Youssef Msakni out, their World Cup hopes rest on him. However, Khazri flattered to deceive at Sunderland after arriving to some fanfare for a fee circling £10m – then, following relegation, he was loaned to Rennes and promptly scored a hatful. Frustrating.

Worst: Zbigniew Kruszynski, Piotr Swierczewski and Emmanuel Olisadebe can breathe easy, because Grzegorz Rasiak is bottom of the pile. Spurs found that signing a second-division striker in the final minutes of deadline day is rarely a successful strategy.

Best: Sit down, Sadio, because it’s time Demba Ba got more credit. After failing a medical at Stoke, Ba signed for West Ham on a pay-as-you-play deal and scored seven times in 12 appearances even as they were relegated. Then he helped a pretty average Newcastle team to finish fifth and took his Premier League tally to 36 goals in 66 games before joining Chelsea, where he scored crucial goals against PSG (sending the Blues into the Champions League semi-finals) and, famously, Liverpool. Not bad for a cripple.

Worst: Ali Dia. You may have heard of him.

Best: Tino Asprilla would be the popular choice, but nine goals in 48 games for a title-chasing team is hardly a great return. We’re selecting Aston Villa’s Juan Pablo Angel, because how often does a club-record signing from the Argentine leagues succeed in England after a shaky start?

Worst:Radamel Falcao, albeit for slightly different reasons to Ali Dia.

Best: Leading a not-so-magnificent seven is Shinji Okazaki, who was rather more important to Leicester’s title win than Shinji Kagawa was to Manchester United’s.

Worst: Spurs were so wowed by Kazuyuki Toda’s performances at the 2002 World Cup that they gazumped Sunderland to sign him six months later. Toda had been training with the Black Cats for two weeks, but while they were negotiating his transfer from Shimizu S-Pulse, the midfielder scarpered south. He made four appearances on loan at Spurs, while Sunderland finished bottom with 19 points. Good work, everyone.