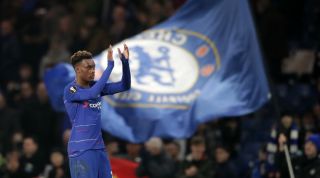 Chelsea will face a trip to Dynamo Kiev of Ukraine in the last 16 of the Europa League, where Arsenal take on French club Rennes.

Friday’s draw in Nyon was not protected by any seeding but teams from Russia and Ukraine were kept apart. Dynamo Kiev were first out against Chelsea.

The first legs of the last-16 ties are set for March 7, when both Premier League teams will be at home.

The Blues will face Dynamo Kiev in the next round of the Europa League, with the first leg to be held at Stamford Bridge.  pic.twitter.com/hSMJ87vgE0— Chelsea FC (@ChelseaFC) February 22, 2019

The returns will taking place on March 14 as the London clubs look to stay on course for the final in Baku.

Arsenal progressed from the round of 32 with a 3-1 aggregate win over BATE Borisov, overturning a first-leg loss in Belarus after victory at the Emirates Stadium on Thursday night.

Chelsea, meanwhile, defeated Malmo, winning the second leg 3-0 at Stamford Bridge to add to a 2-1 away victory in Sweden.

Elsewhere, Eintracht Frankfurt of Germany were paired with Serie A side Inter Milan and Dinamo Zagreb will play Portuguese outfit Benfica.

Napoli tackle Austrian side Salzburg, while Valencia, who knocked out Celtic, have been paired against Russian club Krasnodar.