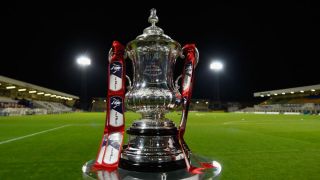 Defending FA Cup winners Arsenal have been pitted against Sunderland in the third round, while Premier League leaders Leicester City will face Tottenham.

Arsenal are looking to win the competition for the third straight year having followed up their 3-2 extra-time win over Hull City in 2014 by beating Aston Villa 4-0 last season.

And Arsene Wenger's men will be expected to get their campaign off to a winning start against a Sunderland side the London club defeated 3-1 in the Premier League last Saturday.

Sunderland's visit to Emirates Stadium is one of five all-Premier League ties, of which Tottenham's visit to Leicester is the most enticing.

Claudio Ranieri's Leicester have stunned the Premier League with their blistering form this season, which sees two points clear of Arsenal at the top of the table, and snatched a 1-1 draw from Spurs at the King Power Stadium in August.

Tottenham - who last won the FA Cup back in 1991 - can claim to still be in contention for the title, with Mauricio Pochettino's men trailing Leicester by just six points, but will need to be at their best to avoid falling at the first hurdle.

Manchester City visit Norwich City as Manuel Pellegrini's side aim to reclaim a trophy they lifted in 2011, while Alan Pardew takes his Crystal Palace team to former club Southampton.

Another of Pardew's former clubs, Newcastle United, face a long trip to Watford.

Non-league Whitehawk will have extra motivation for their replay with Dagenham and Redbridge knowing that a trip to Everton is the reward for victory.

The third-round ties will be played between January 8 and 11.