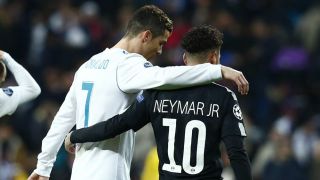 Cristiano Ronaldo laughed off reports linking Neymar to Real Madrid, saying the LaLiga giants were always at the centre of transfer speculation.

Neymar is linked with a switch to Madrid from Paris Saint-Germain in the close-season despite only joining the Ligue 1 club in a world-record move last year.

But Madrid are reportedly interested in numerous players and that has not gone unnoticed by Ronaldo.

The Portugal international said his team ended up making few signings after all the speculation.

"I have been here eight years and they are always talking about 50 players that are going to come and in the end none come.

"In September a lot of players are going to come and then in the end those who reach the finals are always the same."

Madrid are aiming to win a fourth Champions League in five seasons when they face Liverpool in the final Saturday.