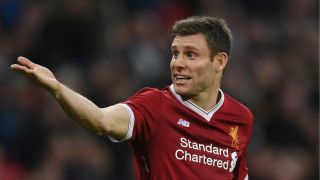 James Milner is not included in Liverpool's squad for the Premier League season finale against Brighton and Hove Albion - but Adam Lallana returns to sit on the bench at Anfield.

Midfielder Milner misses out as a precautionary measure due to a muscle issue, according to the club's official website.

Jurgen Klopp explained the decision to leave out the 32-year-old, who now faces a race to be fit in time for the Champions League final against Real Madrid on May 26.

"It’s a little injury. It’s serious enough to put him out for today; he couldn't train the whole week," the German manager said prior to kick-off.

Liverpool are worryingly short of midfield options for Kiev - Alex Oxlade-Chamberlain is certain to miss the game with a serious knee injury, while a back issue continues to keep Emre Can out of action.

However, Klopp will be boosted by the return of Lallana ahead of the clash with Madrid.

The England international has not featured since a brief substitute appearance against Crystal Palace at the end of March due to a hamstring injury, but is among the substitutes on Sunday.

"Good, of course. [He is] an important option for us," Klopp added on Lallana. "How long [he could play], I don’t know – we have to see what’s possible. But he trained completely normally, and that’s of course good for us in these times."

As for the XI against Brighton, captain Jordan Henderson is recalled while Sadio Mane plays from the start despite an injury scare during the week.

Forward Dominic Solanke is also included in an attacking team for Liverpool, who know a win will secure them a top-four finish for a second successive Premier League campaign.