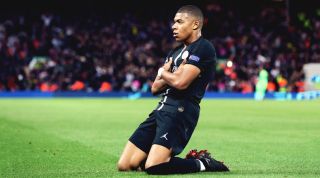 Real Madrid are planning a return to the Galactico era, according to reports in Spain - and it might not be all that unlikely to achieve, either.

Los Blancos are planning a stunning £260m raid next summer for some of Europe's biggest talents, spearheaded by transfers for Kylian Mbappe, Erling Haaland and Eduardo Camavinga - who are all under the age of 22 and among the most highly-coveted stars in world football.

Mbappe represents the most difficult coup of the lot, having signed for Paris Saint-Germain initially on loan for a year before officially joining for a fee believed to be £160m, in order for Les Parisiens to avoid the FFP implications of signing Neymar the same summer. With Mbappe unsure whether to sign another contract, however, the World Cup winner could be tempted to swap France's capital for Spain's.

In the last two years, PSG have tried to offer Mbappe a new deal. Neymar apparently earns €20m more than the Frenchman, and though this has annoyed Mbappe somewhat, it's thought that money isn't the most important factor for where he goes next, with a chance to conquer in the Champions League being offered at Madrid.

Mbappe has just a year left on his deal next year - PSG may want to cash in if possible. Erling Haaland is another huge but realistic target for Zidane, given that Borussia Dortmund will want to cash in, too.

Haaland cost around £20m from RB Salzburg last January, following his explosive performances in the Champions League. The Norwegian teen has looked fantastic in the Bundesliga but with his release clause is apparently very low at Signal Iduna Park.

Part of the reason that Dortmund were able to sign him so cheaply was down to the assumed reason that they would sell him on for a larger fee. With Madrid looking to replace Karim Benzema in the next couple of years and Luka Jovic still not impressing, Haaland may be a world-class solution.

Likewise, Eduardo Camavinga is a long-term solution for replacing a Bernabeu icon in Casemiro. The 17-year-old midfielder was valued at around €90m before lockdown, but with prices having dropped significantly, he may not be worth that anymore.

Ligue 1 was abandoned: the Rennes talent went four whole months without playing. With many French sides looking a little more cash-strapped than before, Rennes may well accept a lower payment for their starlet.

Real Madrid have also shown interest for the likes of Jadon Sancho, Bernardo Silva and Harry Kane in the past. It's unknown whether or not the club will be back in for another of these stars in 2021, too.