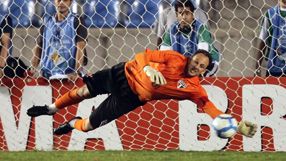 The 38-year-old former Brazil goalkeeper, a free kick and penalty specialist, converted a second-half spot-kick although it was not enough to prevent the former South American champions losing the match 3-2 in the Sao Paulo state championship.

The goal partially atoned for a mistake which led to Paulista's opener.

His first chance to complete a century will be in Sunday's derby with Corinthians.

Sao Paulo dropped from first to third in the table while Corinthians went top with a 3-0 win over Oeste.

The competition is the biggest of the state championships which form the prelude to the Brazilian season.