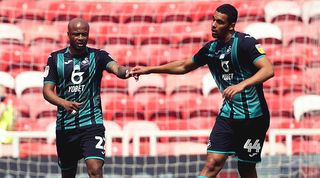 Swansea City started the season phenomenally, with five wins in their opening six games, including an excellent 1-0 win over table-toppers Leeds, courtesy of a last-minute Wayne Routledge goal. Since then, however, the Jacks have only won three more matches on the road.

It’s been a strange season of sorts for boss Steve Cooper. Andre Ayew has provided star quality up top and young keeper Freddie Woodman - on loan from Newcastle - has become a huge hit with the fans, but too often, the Swans have lacked any real bite going forward.

They'll be hoping for a positive result against relegation battlers Luton Town though this weekend. It’s now or never time for them.

Second-bottom in the league, six points from safety and boasting comfortably the worst defence in the division. Seventy-one goals shipped in 37 matches - eight more than anyone else - is a hideous stat and fans may already be resigned to League One football next season.

The club have been thrown into turmoil after sacking manager Graeme Jones during lockdown, in a bid to both save costs and turn the tide, with former gaffer Nathan Jones (no relation) re-appointed on a temporary basis. The Welshman has a massive task on his hands.

It’s not a good time to be a Hatters fan, with a miserable few weeks the likeliest forecast. On the plus side, a late escape would rank among one of the greatest Houdini acts in recent memory.

Kick-off is at 12.30pm BST and the game is being shown on iFollow in the UK - the cost for UK residents is £10 per game, but just £6 for overseas viewers, so if you use a VPN you can get it cheaper. See below for watching details where you are.