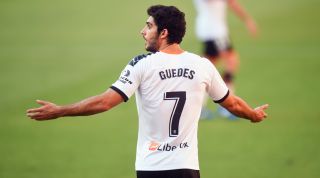 According to Spanish publication Marca, Valencia have put their entire squad up for sale.

The club recently sold star winger Ferran Torres to Manchester City for £20m, and this week moved on midfielders Francis Coquelin and Dani Parejo to Unai Emery's Villarreal for under £10m, combined for the two players. Now, the Valencia hierarchy have told new manager Javi Gracia that the entire squad is on the transfer list - minus one player.

Valencia aim to keep Jose Luis Gaya - their highly-rated 25-year-old left-back, who has come through the academy - and give him the captaincy. Apparently though, even Gaya could be sacrificed, should the right bid come in the Spaniard.

This has put the whole of the Premier League on alert.

23-year-old forward Goncalo Guedes signed for £36m from Paris Saint-Germain in 2018 - now, he could leave for half of that figure. The Portuguese is a perfect fit for Wolverhampton Wanderers' set-up, though Arsenal have been linked in the past. He would also offer Liverpool, Leicester City and Everton more depth in attack.

Geoffrey Kondogbia has also been a target for Arsenal before - who are in need of midfield grit right now. Everton again may be interested, while Manchester United may look to add the midfielder to their ranks; Carlos Soler is a midfielder capable of dictating play alongside Kondogbia, and he may looked at by all three clubs, as well as Manchester City and Liverpool, who are both interested in Thiago.

Former Arsenal defender Gabriel Paulista could well return to the Premier League, with clubs such as Fulham and Tottenham Hotspur keen to add defenders, while forward Rodrigo will be a target for many sides across Europe.

Leicester are in need of more firepower up front, United may well entertain the idea of bringing in a back-up striker to complement the options they already have in attack, while Borussia Dortmund, AC Milan and Lille may all look to Rodrigo as an option.

With such a firesale at the Mestalla, Valencia may be tempted to move Gaya on anyway. Chelsea are said to be interested in a left-back, while PSG need better competition for Juan Bernat.

It's not clear just yet as to what's happening at Valencia, but fans are worried about the state of the club and the intentions of owner Peter Lim.