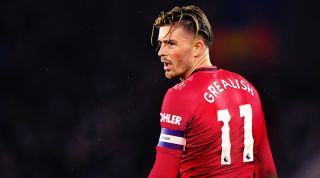 It's job done for Jack Grealish.

The Aston Villa captain was a wanted man after a storming season in which he led the Villans up from the Championship. When no concrete offers materialised, Jack stayed put in the Midlands, with the sole task of trying to keep his club in the Premier League.

It's been widely expected for a while now that the Peaky Blinder of the Prem would leave Villa Park, whether or not the club survived the drop. At least he can feel like he's achieved this season's goal, as rumours of a move to a bigger club circle.

The big one, of course, is Manchester United. Revitalised by the signing of Bruno Fernandes and playing Champions League football next season, the appeal is obvious: but it's become just as clear in recent weeks when Ole Gunnar Solskjaer has shuffled his pack, that United need a little more depth.

How would Grealish work at Old Trafford?

As an alternative to Marcus Rashford

ARSENAL 5 centre-backs who would immediately improve the Gunners

CHELSEA 6 goalkeepers the Blues could move for this summer

Despite Dean Smith's tendencies to play his talisman further up the pitch, Grealish isn't an output player, as such: he's beautiful to watch, can dribble, has great vision and his instinct to call for the ball and make things happen are useful in a side that needs creation. But he perhaps isn't efficient enough to be the primary creator of a top side. He's similar to David Silva - who needs a De Bruyne beside him - in that he's almost impossible to win the ball from.

With that in mind, left-wing is perhaps the best fit for Grealish at United. His combination play is excellent and he would thrive alongside Paul Pogba and Bruno Fernandes. The only issue is where Marcus Rashford fits into the equation: he's played on the right, but he's more devastating from that left halfspace.

As an alternative to Bruno Fernandes

Bruno Fernandes has transformed Manchester United. So much so that he's almost been an ever-present in the side, through fixture congestion and extra-time in the cup - he's that important already.

Ole must be praying that nothing happens to his shiny new No.10 over the course of the next year, as Bruno is key to an assault for the title. Grealish, however, could step into the midfield to create alongside Pogba if necessary.

The David Silva similarities make this role a good fit for Grealish, who's more athletic than the outgoing Manchester City star. Both Pogba and the Englishman dictating from the centre shares the burden of chance creation while offering a more packed midfield; it's the way that Pep likes to play and it could be the perfect way to pick the lock of deep blocks without Bruno Fernandes there as a skeleton key.

Both Grealish and Pogba favour that LCM berth, though. The only questions from Ole's perspective about the midfield would be whether it's too open in transition and if the chosen RCM has optimum passing angles. It may take a bit of coaching to work out.

As an alternative to Paul Pogba

Of course, it's no foregone conclusion that Paul Pogba will be at Old Trafford, come September. The Frenchman has been heavily linked with a move abroad for about a year now, and though he looks much happier in a more competent side, perhaps United will look to shift him anyway.

Grealish in a midfield double-pivot is awkward to say the least. He's an attack-minded footballer, not a Brummie Michael Carrick - compromising his mazy runs in the final third in order to shoehorn him into a two-man midfield seems illogical, especially when his passing is good, but not so good that you'd want to cut out the majority of his game to focus on that alone.

While Grealish isn't a natural deep-lying playmaker though, United could find his ball retention in that area of the pitch particularly useful. When Arsenal moved Santi Cazorla deeper in 2015, they found that Mesut Ozil's output was maximised from having such a forward-thinking footballer behind him.

Let's not forget either that with Pogba's "lazy" body-language having been in an issue in the past, swapping him out for one of the most outwardly passionate young captains in the Premier League would perhaps give Ole a little grace when it comes to Grealish adjusting to this role off the ball.

With Grealish quite so deep, United would maybe have to compromise one of their inside forwards, for the sake of balance. Ole would have to juggle how to get the best from Bruno Fernandes and his new signing.

Jose Mourinho was the first Man United manager to flirt with the idea of a back three - probably due to his defensive options not quite being as reliable as he'd have liked them. Still, Solskjaer has continued toying with this system, especially in bigger games - most recently, United lost to Chelsea in the FA Cup semi with a back three.

This system is perfect for the counter-attack, with Grealish again offering his magnetic ball retention skills while United regroup and reshape. He's capable of pinging balls forward, too. We've opted with Bruno Fernandes behind Anthony Martial, but really, the Red Devils have an array of attacking options they could opt for: even on-loan Odion Ighalo's in the frame, thanks to his physicality and hold-up play.

If United choose to surrender possession, well, Grealish is well used to that from being in a side fighting relegation. He's certainly not going to let you down in that sense.

Perhaps - just perhaps, this is the best way to squeeze all of Man United's riches into the one line-up.

United haven't consistently played a 4-4-2 for years. With Grealish and Fernandes as wide midfielders rather than wingers, Ole would have the option to drop into two flat blocks of four in defence if needed. In attack, the wide midfielders would drift in centrally, similarly to how Ralph Hassenhuttl's hyper-high pressing Southampton choose to play.

This is a particularly fluid system and relies on a lot of support from the full-backs - not to mention the fact it omits Mason Greenwood from the side: yes, he's 18, but also kind of undroppable right now.

United may look to sign a right-winger, if reports are correct - looking at you, Mr Sancho - and a more defensive-minded midfielder may well be an option too. Should they fork out for Grealish, he won't come cheap either, despite the drop in player prices post-COVID, but what they would be investing in is a naturally creative leader who typifies the new spirit United are building. He's pretty versatile, too.