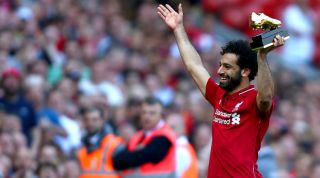 This weekend, we're likely to see the 800th Premier League goal of the season hit the back of the net. There have been 791 goals scored in 2018/19 so far, with almost 200 plundered by Manchester City, Liverpool and Arsenal alone.

When it comes to players, though, the joy has been more evenly distributed: no one forward is running away in the race for the Golden Boot, and more than 50 have enjoyed putting one away on at least five occasions this season.

Eighteen teams are represented on the list (sorry, Huddersfield and Cardiff), while some sides appear more than others (give it a rest, Manchester City).

But can you name them all of those players? We’re giving you eight minutes to get all 54 goal-getters with five or more since the beginning of the season. You shouldn’t have to jog your memories too much, so we’re expecting you to do pretty well.

Let @FourFourTwo know how long was left on the clock once you’ve got every one (right?), and you might just make our daily leaderboard…

SEE ALSO… Predicted! How the Premier League table will (definitely) end up this season