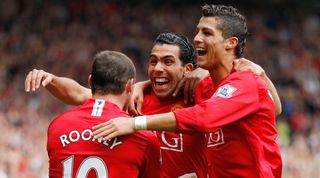 Plenty of plaudits (rightly) went to N’Golo Kante in midfield as Chelsea won the Premier League last season, but the influence of Antonio Conte’s rejuvenated front three should not be ignored. The trio had struggled together the previous season, but things clicked after Conte’s arrival.

Eden Hazard recaptured his best form; Pedro turned back into the player we all knew from his days at Barcelona; while Diego Costa was... well, Diego Costa. The trickery and pace of Hazard and Pedro out wide, combined with Costa’s bullish approach through the middle, proved a combination that few sides were able to stop.

Napoli became the highest-scoring team in Serie A since the Juventus squad of 1959/60 when they ploughed in 94 goals last year. Of that total, Italy’s Insigne, Belgian Mertens and Spain international Callejon contributed 60. Despite their fantastic form, however, the Partenopei were still unable to win a first league title in nearly three decades.

This season, they are hoping things will be different. Picking up where they left off, Napoli's top trio have managed 34 goals between them across all competitions as their team sit top of Serie A – one point ahead of holders Juventus with 15 games to play. Bellissimo.

An unlikely combination thrown together from various corners of the world. Colombian Falcao arrived from Argentina, Brazil’s Hulk came via Japan, while Varela hailed from Portugal. Yet the continents combined in sublime fashion when these three led the line for Porto between 2009 and 2011.

In their second season together, the trio scored a whopping 86 times between them. That fired Porto and a young Andre Villas-Boas to a treble of trophies (Primeira Liga, Taca de Portugal and Europa League), with the team also going the whole league season undefeated. Power, ruthless finishing and pace from left to right made Porto’s front three a frightening prospect.

Runners-up in both the Bundesliga and Champions League, it was a leaky defence that ultimately let down Jurgen Klopp’s Dortmund side of 2012/13. In a season of ‘almosts’ for Die Borussen, their one huge positive was the attacking triumvirate which destroyed defences Germany and Europe-wipe.

Klopp’s tenacious front three produced some of the most impressive and energetic attacking football seen in Europe – most famously, that 4-1 demolition job of Real Madrid in the Champions League semi-final first leg, where Robert Lewandowski grabbed all four goals.

The most expensively assembled strikeforce in the history of football, which will cost Paris Saint-Germain around £400m (after the Mbappe deal goes through this summer). So far, though, it looks like money well spent for the Ligue 1 leaders.

Unai Emery’s side were beaten to the Ligue 1 title by Monaco last season, but their newly formed attacking trio are well on their way to bringing that title back to Paris. Not only have ‘MCN’ scored 69 goals between them already this season, but they've also produced over 30 assists.

There’s between disruption off the pitch (between Neymar and Cavani), but their understanding on it could fire the Parisians to a first ever Champions League triumph.

Hailed as Manchester United’s new ‘Holy Trinity’, Ronaldo, Rooney and Tevez were arguably the most gifted – and feared – frontline in English football history. They may not have achieved the longevity of predecessors Denis Law, George Best and Bobby Charlton at Old Trafford – but they certainly had silverware to show off during their two years together.

Each player was young, hungry, quick and deadly in front of goal. As a result, Alex Ferguson’s mouthwatering attack interchanged at will to help United win back-to-back Premier League titles, as well as the League Cup and the crowning achievement: the 2008 Champions League. Ronaldo finished the season with 26 goals; Rooney 20; while Tevez and Dimitar Berbatov added another 29 between them.

The spearhead of Barcelona’s most successful ever team: Henry, Eto’o and Messi proved an unstoppable force for Pep Guardiola’s dazzling side, especially during the 2008/09 season. The trio scored an even century of goals between them as Barça won La Liga, Champions League and Copa del Rey titles - an unprecedented feat in the history of Spanish football.

Big victories became their trademark. Among the victims were Real Madrid (humbled 6-2 at the Bernabeu), Sevilla (third that season but beaten 4-0 by Barça) and Atletico Madrid (swept aside 6-0). Terrifying.

Since Gareth Bale’s arrival at the Bernabeu in the summer of 2013, the Welshman’s combination with Cristiano Ronaldo and Karim Benzema has been phenomenal – or at least for their first three seasons together, anyway. They've plundered 400 goals between them and netted three Champions League trophies – yet still Madrid’s strikeforce can't escape the critics.

Niggling injuries have held Bale back at times, Benzema’s scoring record has been critiqued, and even Ronaldo has had to suffer the odd whistle and jeer. Their time together may soon be coming to an end, though, with all three linked away from the club. But when the ‘BBC’ have departed, those demanding Madrid fans will realise just what they've had.

Brazil stormed to World Cup glory in 2002 – but it was the manner in which they did so that was most impressive. Luiz Felipe Scolari’s side cruised through the tournament, outscoring their opponents 18-4 en route to a record fifth crown.

‘Triple-R’ scored 15 of those 18 goals, with at least one of them on the scoresheet in every single game. It made them one of the most lethal attacking forces in international football history – just ask David Seaman.

10 of football's most bizarre goal reactions: fines, fights... and firearms

Three players. Three seasons. Seven major honours. A total of 173 assists and 364 goals. Football has never seen anything quite like the combination of Lionel Messi, Luis Suarez and Neymar – and isn’t likely to again anytime soon.

With superhuman Lionel Messi out on the right, tenacious tyro Luis Suarez through the middle and a blossoming Neymar on the left, the three enjoyed a symbiotic relationship that was incredible to behold – for Barcelona fans and mutuals alike.