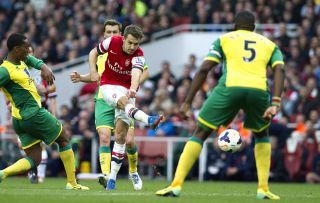 One point for profligate Liverpool

A topsy-turvy tussle at St James' Park, where Alan Pardew's men looked set to take a deserved 1-0 interval lead only for Mapou Yanga-Mbiwa's dismissal to cause a momentum shift.

The Toon took the game to Liverpool in the first half with Cheik Tiote bossing the midfield and Messrs Sturridge and Suarez struggling to affect the game from wide areas. However, the numerical disadvantage forced Newcastle onto the back foot after the break and Brendan Rodgers' side were left to rue some wayward finishing. Just 4 of their 15 second half attempts were on target.

As well as scoring his 100th Premier League goal, Liverpool skipper Steven Gerrard ended the game with 91% pass completion and set up 6 chances for his team-mates, comfortably more than any other player.

"We had a resilience and character - and that got questioned about us last year - but we showed that is in the group and I'm immensely proud of the whole day," said Alan Pardew. "Liverpool are a great side and we matched them."

The Emirates Stadium faithful were treated to some outstanding goals from Jack Wilshere and Aaron Ramsey, yet Canaries boss Chris Hughton felt the 4-1 scoreline was a tad harsh on his team's performance.

"I think the scoreline flatters Arsenal," said Hughton. "I don't think it's a true reflection of what we saw. We had some very good periods, particularly in that first half when I thought we were really unfortunate to go in at 1-0 down, but they have that type of quality."

Mikel Arteta dominated the midfield with 89 of his 94 passes finding their intended target, but - as FFT's Ben Welch noted at the Emirates - once midfield partner Mathieu Flamini had departed through injury the visitors enjoyed prolonged periods of possession. They could not convert it into goals, however, and were suitably punished as Wilshere's stunning opener was added to by Mesut Ozil and Aaron Ramsey.

Fortune favours the Blues, not Bluebirds

An uncomfortable hour for the Blues at the Bridge, but after a generous slice of fortune helped Chelsea level before half-time, their flair players came to the fore after it.

Bluebirds boss Malky Mackay was left fuming over Chelsea's leveller, after Samuel Eto'o stole the ball off goalkeeper David Marshall, saying: "It was 10 minutes before half-time and that makes a huge difference in the slant of what team-talks can sometimes say, so that obviously is a large factor."

Jose Mourinho's men prospered down the left flank with Ryan Bertrand often joining Eden Hazard in attack as Chelsea poured forward. The Belgian set up five chances as well as grabbing two goals for himself, while John Terry recorded 98% pass completion from 84 passes as well as making a game high 11 clearances for his side.

Roberto Martinez hailed substitute Steven Pienaar's moment of magic after the South African scored within 10 seconds of his second half arrival to defeat Hull.

The Spaniard's opposite number Steve Bruce was less joyful, slamming Toffees midfielder Gareth Barry for a "horrific" tackle on Sone Aluko after the Manchester City loanee had earlier forced Danny Graham to limp off.

Winning the midfield battle was key to Everton's success. Barry and James McCarthy topped the passing charts with the former Wigan man also making 11 ball recoveries - more than anyone else - while going forward Kevin Mirallas set up 6 chances for his team-mates, including the assist for Pienaar's winner.

More concerns for David Moyes as Adam Lallana's 89th-minute bundle from a corner earned Southampton a point at Old Trafford to extend their impressive start to the campaign.

The Saints out-passed and out-shot their illustrious hosts (by 18 attempts to 12) and would have been disappointed not to have found the net at all after 7 of them were on target.

FFT's match preview tipped the battle between Michael Carrick and Morgan Schneiderlin to play a key part in proceedings. The England midfielder made a solitary successful pass more than the French starlet, but the Southampton man was more influential higher up the pitch. Schneiderlin made more attacking third passes than anyone else on the park as well as being the game's best tackler.

No goals at the Britannia Stadium but no shortage of controversy, with Baggies boss Steve Clarke bemoaning a "stonewall penalty" that was not awarded to his side for a challenge on Youssouf Mulumbu.

"How the officials have missed it is beyond belief really but sometimes you get decisions and sometimes you don't and today it is a decision that didn't come our way," he said. "I think if he (Mulumbu) wanted to try and con the referee he would have gone down on the first contact but he managed to wriggle free of that and it's clear, whatever angle you look at it, it's a penalty."

Clarke still departed the happier of the two bosses. The draw set a new club record of five games unbeaten in the Premier League, while Albion created more chances and Potters goalkeeper Asmir Begovic was named the man of the match.

Stoke have failed to score in four of their last five league games, and for once midfielder Steven N'Zonzi was not the dominant passer. That honour fell to Mulumbu, who also made the most ball recoveries (10).

Gus Poyet's managerial debut at Sunderland will be remembered for all the wrong reasons, as the Black Cats remain rooted to the foot of the table after this 4-0 humbling.

Swans boss Michael Laudrup, meanwhile, insisted he knew there was nothing to worry about regarding the Welsh club's home form, having not won a league game at the Liberty Stadium since March.

The home side, predictably, dominated possession (64%) and although the Wearsiders had just one shot in the first half, their opponents had not fared much better in front of goal either.

Two goals in as many minutes after the interval signalled Sunderland's demise, as the floodgates opened allowing Swansea to hammer in 9 efforts at goal in the second half alone (not including the two own goals).

No birthday joy for Big Sam as he turned 59. Instead, counterpart Manuel Pellegrini was left celebrating a first away win of the season after a convincing display in East London.

The Hammers couldn't be faulted for effort and made a game of it when Ricardo Vaz Te acrobatically volleyed in. Yet City always looked silkier and slicker with Sergio Aguero and David Silva in scintillating form.

The Spanish schemer made more attacking third passes than anyone else, although he was only marginally ahead of the home side's standout performer Mark Noble. The local lad not only completed the most take-ons in the match, he made as many ball recoveries as Yaya Toure (11) and was the game's best tackler.