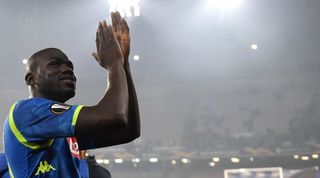 When Napoli visit Arsenal in the Europa League on Thursday, it will be the first time that Kalidou Koulibaly has played in London. His previous two visits to England have been ones to forget: December's 1-0 defeat at Liverpool in the Champions League, and the 2-1 loss at Manchester City in October 2017.

But it's highly unlikely to be the last: the Senegal international will be a prized commodity this summer, and several Premier League clubs have the cash to get him. You'd better get used to seeing his name in gossip columns over coming months.

Manchester United know only too well that central defence is a position they must strengthen, and Koulibaly had been linked to Old Trafford before. Arsenal manager Unai Emery has reportedly made the Napoli man a top priority on his wish list, and you can understand why given the erratic performances of Shkodran Mustafi and injury problems befalling Laurent Koscielny.

Transfer embargo depending, Chelsea should also be keen, especially if Maurizio Sarri manages to save his job – it was under the current Blues boss that the stopper made massive improvements during their three seasons together in Serie A.

Sarri's influence on Koulibaly should not be overlooked. Under his guidance the 27-year-old improved tactically, learned to build attacks from the back and even started joining them with some unexpected mazy runs that regularly ended in the opponents' penalty area. The Senegalese has become much more elegant on the ball, and now his style is starting to resemble his biggest idol, Lilian Thuram.

"He's the player who inspired me," Koulibaly said in 2014. "He gave me a lot of joy, alongside other stars who won the World Cup in 1998. Thuram was an example on and off the pitch, and I hope to reach his level."

Back then, those comparisons were absolutely unthinkable. After an unorthodox rise, they're not anymore.

RANKED Every team to have won the Champions League, from worst to best

Kalidou's ball control was so awkward in his early days that even Metz youth coaches decided that he wouldn't be able to become a professional footballer. They let him go when he was 15.

Three years later they acknowledged their mistake and agreed to take him back, and by 2010 he was in the senior squad thanks to seal of approval from coach Dominique Bijotat. But Koulibaly's self-confidence wasn't high, to put it mildly. "Every mistake made him lose his focus for the rest of the game," Bijotat later remarked.

It took time to become tougher mentally, but the stopper has always been dedicated and willing to learn. He just loved football too much to give up, and that helped him to overcome numerous obstacles.

When Metz were relegated to the third division in 2012, Koulibaly didn't have many decent offers in the country he'd grown up in, and instead moved to Belgium to sign for Genk.

There, the shy youngster gradually became a leader, with his talented team-mate Julien Gorius boldly claiming that "we haven't had such a talented centre-back in our league since Vincent Kompany".

Such praise made scouts take a closer look at him, and Rafa Benitez received positive reports about the relatively unknown player. The Spaniard travelled to witness Koulibaly in action and was convinced that he would make a fine buy for Napoli. He was right, of course, but remarkably, the stopper himself was still sceptical about his potential. When Benitez called, Koulibaly thought it was a prank and hung up – twice. Only the third attempt to get in touch with him was successful.

Napoli got their man for €10 million in the summer of 2014 – a deal that has since proved a brilliant bargain. It took Koulibaly one problematic season to find his feet in Serie A, before he finally flourished with Sarri on the bench.

Eventually, his rise caught the eye of France coach Didier Deschamps, who openly considered calling up the defender – only to find out, embarrassingly, that Koulibaly had already chosen Senegal after becoming tired of waiting.

And so he couldn't follow the footsteps of Thuram in 2018, instead watching France lift the World Cup on TV. Koulibaly did take part in the tournament, though, and impressed despite the fact that Senegal were knocked out of the group stage. After a superb season, he was rightfully considered one of the top centre-backs in the world. The defender even scored five goals in 2017/18, including a dramatic late winner in the game of the season at Juventus.

It was only natural that the best Premier League clubs were interested in signing him back then, but he chose to extend his contract at Napoli until 2023. Was it a mistake? The southerners are about to finish second again, but there's a feeling that the team as a whole and Koulibaly personally have stagnated under Carlo Ancelotti.

It could be the right time to move on to his next challenge, and a good show on Thursday won't hurt Napoli's chances of getting a very good fee for their talismanic stopper. Prying eyes will be watching.

LIST 14 teams that really weren't too good to go down