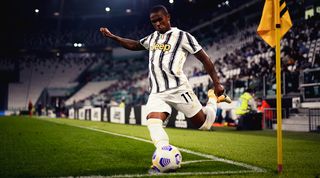 Bayern Munich's search for a new winger appears to have reached its natural conclusion with Douglas Costa re-joining the Bavarian side on loan from Juventus.

But that isn't the biggest news coming out of the Allianz Arena today. Eric Choupo-Moting, formerly of Stoke City has joined the Champions League winners from Paris Saint-Germain on a free transfer.

Choupo-Moting raised eyebrows two years ago when the then-relegated Premier League player inexplicably moved to French giants PSG. Having worked with coach Thomas Tuchel before, the Cameroonian international became a squad player in the French capital, famously clearing one of his own teammate's shots off the line in a Ligue 1 game.

Now, ECM has taken a step up to the side that beat his PSG team in August's Champions League showdown.

The 31-year-old joins Douglas Costa as what will likely become Bayern's last two signings of the transfer window. Costa played for Bayern under Pep Guardiola from 2015 onwards, moving to Juventus in 2018 on loan initially, before making the deal permanent that same year.

After summer signing Leroy Sané picked up an injury yesterday, Bayern were keen to add another talent to their squad in wide positions and have been linked with a move to take Croatian cross-whipper Ivan Perisic back to Bavaria, after the World Cup finalist spent last season on loan from Inter Milan.

Douglas Costa has been searching for a club all window, though. He has not been considered to be part of new manager Andrea Pirlo's plans, given Pirlo's penchant for a 3-5-2 formation with wingbacks as opposed to wingers in the final third, in the shape of Costa.

Bayern Munich have also moved to replace Thiago Alcantara late on in the transfer window, too. It was thought that manager Hansi Flick was set to stick with Joshua Kimmich in the central midfield role, after the versatile German inherited Thiago's No.6 shirt following the Champions League final.

NEWS Barcelona announce losses of £88million due to coronavirus impact

Bayern have however swooped for Espanyol midfielder Marc Roca, who joins following the Catalan club's relegation from La Liga. Roca costs just £15m and at 23 years of age, has plenty of room to grow into his role at the Allianz Arena.

After coming close to deals for Max Aarons of Norwich City and Sergino Dest of Ajax - who later joined Barcelona - Die Roten have since captured Bouna Sarr for depth at right-back from Olympique Marseille.