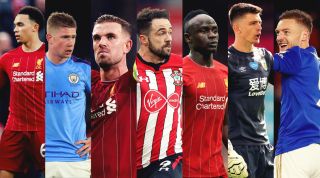 The nominees for the Premier League end of season awards have been announced - and it's up to the fans to vote for their favourites in each category.

Liverpool lead the way for the nominations; there are three Reds up for the Player of the Season, with Trent Alexander-Arnold the only player featuring in both the senior and youth categories.

Manchester United have three nominations for the Young Player of the Year, while Chelsea have two - Frank Lampard is up for the Manager of the Year gong. Kevin De Bruyne, meanwhile is up twice in the Goal of the Season stakes.

Nine wonder goals 🤩 Which one gets your vote for @premierleague Goal of the Season?#BeAKing pic.twitter.com/6hxTC1yPBgAugust 7, 2020

The 2019/20 EA SPORTS Player of the Season nominees

Fans have until 6pm BST on Monday 10 August to vote for their favourite on the EA SPORTS website. The votes of the public will be combined with those of the 20 club captains and a panel of football experts to decide the winner.

FFT's Player of the Season picks

The 2019/20 TAG Heuer Young Player of the Season nominees

Fans can vote by visiting the TAG Heuer website up until 6pm BST on Monday 10 August. The public vote will be combined with the choices from a panel of experts to decide the winner.

The 2019/20 Barclays Manager of the Season nominees

Fans have until 6pm BST on Monday 10 August to choose their favourite by voting on the Premier League site.

The 2019/20 Budweiser Goal of the Season nominees

Again, fans have until 6pm BST on Monday 10 August to choose their favourite by voting on the Premier League site.