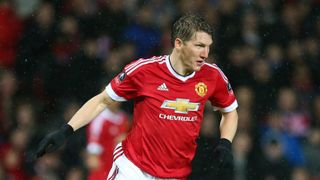 Louis van Gaal has confirmed Manchester United will have to make do without the services of Bastian Schweinsteiger when they take on Newcastle United on Tuesday.

The Germany international picked up a knee injury in the 1-0 FA Cup win over Sheffield United at the weekend and has consequently been ruled out of the trip to St James' Park.

"Bastian is injured, that we know," van Gaal told MUTV on Monday.

"We have seen that because he could not move."

Furthermore, Van Gaal has also made it clear Adnan Januzaj will not feature in Monday's Under-21 clash with Reading.

The Belgium international prematurely returned to Old Trafford after his loan spell with Borussia Dortmund was cut short and he was expected to play for the U-21 team in order to gain match fitness.

However, Van Gaal feels the 20-year-old is not fit enough to play yet and will not take any risks with the attacking midfielder.

"We have reconsidered and we think we have to build him up for the game and not risk too much by putting him in a game at once," Van Gaal said.