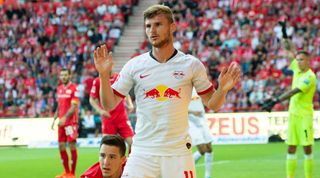 Ole Gunnar Solskjaer will look to bolster his Manchester United strike force next summer and Jadon Sancho is top of the wishlist, reports the Evening Standard. Sancho, 19, was on the books at Manchester City as a youth player but currently plays for Borussia Dortmund, where he has scored 15 goals in 48 appearances.

The prolonged saga over Neymar's future continues, with the Daily Mirror reporting that Paris Saint-Germain and Barcelona are closing in on a deal. The paper says PSG want Ousmane Dembele to form part of the package, but the Daily Mail reports that the France forward does not want to leave the Nou Camp.

Liverpool target TimoWerner has suggested he is open to leaving RB Leipzig despite signing a new deal, reports the Daily Mirror. Werner has previously told FourFourTwo that playing in the Premier League is "a dream" and admitted in 2018: "Manchester United and Liverpool were the teams I watched quite a lot in England. They were the two that I’m a little bit a fan of, because they have so much history."

AsmirBegovic is looking for a way out of the Vitality Stadium after losing his first-team place to Aaron Ramsdale, with The Sun reporting there has been interest from France, Italy, Spain and the United States for the 32-year-old.

Sam Greenwood has piqued the interest of Milan and Juventus, who had their attention drawn to the 17-year-old Arsenal striker when he appeared at the Under-17 European Championship this summer.

Nacho Monreal: The Arsenal defender could be heading back to his native Spain before the European transfer deadline, with Real Sociedad in pole position to sign the 33-year-old, the Evening Standard says.

Tiemoue Bakayoko: The Chelsea man is due to return to Monaco on loan, with RMC Sport reporting that a £31.8m fee for a permanent switch has been agreed.

Dejan Lovren: Roma are due to make a bid to sign the Liverpool defender for £15m, The Sun says.