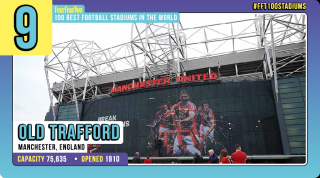 The Theatre of Dreams, as coined by Sir Bobby Charlton. The Castle of Nightmares for many a visitor. The UK’s second-largest football stadium boasts immaculate facilities as befits England’s most successful club team Manchester United (OK, calm down – along with Liverpool...).

Stroll through the magnificent brickwork still in place below the stands and you can almost tangibly feel the vibrant history seeping from the masonry: the Busby Babes; the Holy Trinity of Best, Law and Charlton; the class of ‘92; Wayne Rooney & Co.

On the stadium tours, even non-United fans get caught up in the history and nostalgia draped across posters, tributes and wall murals in the inner sanctums of the Premier League’s finest stadium.

Beyond the timeless Fergie moments captured out there on the pitch – Bruce’s two late headers, Cantona’s chip against Sunderland, Arsene Wenger being sent into the stands, City’s 6-1 demolition of the home side, the Treble’s first-stage win vs Spurs, and many more – there are also national achievements: David Beckham’s free-kick against Greece in 2001, hosting group games at the 1966 World Cup, a Euro 96 semi-final, numerous FA Cup semi-finals and England fixtures held at the ground, and hosting Great Britain matches at the 2012 summer Olympics.

Big matches? Well, there’s the poignant 1958 FA Cup tie against Sheffield Wednesday held 13 days after the Munich air disaster (a 3-0 victory for the Red Devils’ reserves and youth players). Also the first game held under floodlights at Old Trafford: the European Cup semi-final between Manchester United and Real Madrid (2-2; April 25, 1957). There was also the 2003 Champions League Final as AC Milan beat Juventus on penalties following a 0-0.

People love their sport round here. Indeed, the ground has even held baseball, rugby union and ‘shinty’ (Google it). This northern hotbed of football once swelled with 76,962 fans to watch an FA Cup semi back in 1939 – and United weren’t even playing. Grimsby were. Against Wolves.

Most clubs’ attendance records are distant memories from an era of overcrowded terraces, but United’s remorseless architectural ascent into the skies above Manchester means that their thoroughly modern stadium’s current capacity is within touching distance of that all-time mark at a monstrous 75,635.

Barring a brief period bunking up with the neighbours – United played at Maine Road from 1941-49 due to Second World War bomb damage to Old Trafford, close to munitions hub Trafford Park and requisitioned as a military depot – it has been the club’s home since 1910.

With their former Bank Street Ground blighted by poor pitch conditions and fumes from nearby factories, United’s then-president John Henry Davies lent the club the money to relocate to a patch of ground near to the Bridgewater Canal, Old Trafford.

Even back then, rival fans moaned about their wealthy counterparts. Becoming chairman upon saving the cash-strapped club in 1902, Davies had overseen a change of name from Newton Heath to Manchester United, and colours from green and yellow to red and white; now, he lent them £60,000 – £5m in today’s money – to move home. No wonder other fans called the club ‘Moneybags United’.

Davies hired the popular Scottish architect Archibald Leitch – who had a hand in the design of some 20 football stadiums around the time, helping to build Ibrox, Anfield, Twickenham, Hillsborough, White Hart Lane and more. The development was completed in 1909 but officially opened early the next year. Old Trafford was born.

The first visitors? Liverpool, of course. Unfortunately for the locals it resulted in a 4-3 loss. However, the new stadium was reported by one journalist as "the most handsomest [sic], the most spacious and the most remarkable arena I have ever seen. As a football ground it is unrivalled in the world, it is an honour to Manchester and the home of a team who can do wonders when they are so disposed."

This new impressive arena then held the 1911 FA Cup Final replay, before hosting the 1915 final as Sheffield United thrashed Chelsea. England played a match at the venue in 1926, the first time the national team would set foot there (as Scotland snatched a 1-0 win).

The Luftwaffe’s intervention set the club back a bit, but United have frequently had big ideas. Matt Busby being an early proponent of European football, the club were quick to install floodlights in 1957. The year before England hosted the World Cup, the United Road stand (the one at the ground’s north side, opposite the camera gantry) was given a modern cantilever roof and the country’s first private boxes; the Scoreboard End followed suit in 1973 and the Main Stand in the 1980s, as the club devised a long-term plan for a bowl-like stadium enclosed by identical cantliever stands.

However, the ground changed in different ways thanks to the Taylor Report, the Premier League era – and United’s rampant on-field success. Needing to seat the Stretford End, the club abandoned the ‘bowl’ plans, and by Euro 96 had replaced the North Stand with a three-tiered affair costing £18.65m and seating 25,500; by 2000 both ends gained another tier, and by 2006 the two northern corners had been infilled to top the 75,000 capacity mark.

All that means that the main stand is now relatively small, limited due to the presence of the Manchester to Liverpool train line behind it – although future expansion plans could simply build over the top of this.

Despite the growth of the rest of the stadium, the main stand is still the stadium’s historical heart. It contains the camera gantry, dugout, the majority of executive boxes and the original 1910 tunnel, although it is now unused except to commemorate the 1958 Munich air disaster: today’s tunnel is located in the south-west corner, close to the players’ changing rooms and lounge.

Sadly for those who like a little lyricism in their venues, the club has given the stands vanilla names: South, East, West and North, although the latter is now also known as the Sir Alex Ferguson Stand. The East Stand may no longer be called the Scoreboard End but the West will always colloquially be the Stretford End, home to tens of thousands of fans exhorting United to attack, attack, attack...