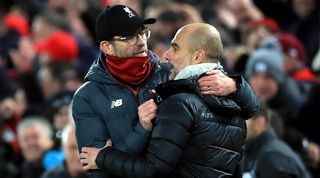 2020 will be spoken of for a long time and for all sorts of reasons. How the world adjusted to the coronavirus and how it was then changed as the pandemic spread across borders and seas will, in time, be its own history and studied in schools alongside the plagues and wars and famines

Football isn’t part of that topic. It’s just one among many, many victims, most of them affected to a far greater – and even tragic – degree.

But it too will be altered, and not just aesthetically in the absence of crowds and atmosphere, but maybe in the nature of competition itself. The circumstances created by the disruption threaten to create a trend which will survive long after the masks have been put away and the plastic screens have been returned to the storage cupboard.

There now exists a great opportunity for the game’s gilded few. While clubs that are revenue dependent will have to retract their budgets to compensate for lost matchday income, others will carry on regardless, secure in the depth of their owners’ pockets.

It will be an advantage accentuated by UEFA’s response to the crisis, and their decision in mid-June to relax the Financial Fair Play regulations. 2020 will now be assessed as part of the 2021 period, with clubs allowed made to make losses exceeding £30m over three-years. There is a caveat, in that such deficits must be shown to be the result of lost income, but that would presumably be just another rope for Europe’s more nimble clubs to skip.

And, on the basis of the early movement in the market, it hardly seems prohibitive. In fact, elite clubs are busy throwing punches that they know their rivals won’t be able to counter. Chelsea will soon add to the £80m they’ve already spent on Hakim Ziyech and Timo Werner by striking a deal for Bayer Leverkusen’s Kai Havertz. At the time of writing, Manchester City have moves pending for Bournemouth’s Nathan Ake and Valencia’s Ferran Torres. In the coming weeks, Manchester United should also make the first of a number of attempts to sign Borussia Dortmund’s Jadon Sancho.

MORE ON THIS Premier League transfers: The position EVERY club needs to strengthen in this summer

Ultimately, these clubs are behaving as they should. They’re being smart. In an economic sense, they’re making big budget acquisitions at a time when the market is underheated. There is far less demand for these players because so few teams can afford them; even Florentino Perez is pleading poverty at Real Madrid. As a result, generational talent can be acquired for a price that wouldn’t normally exist and while someone like Sancho might still go for £100m, that fee would be at least 25% higher under normal circumstances.

In addition to which, the plan to allow five substitutes permanently is another measure in favour of clubs that can afford to trade aggressively. They have the greater resources, but they’re also now able to credibly promise more minutes to new players. In other words, the perfect conditions exist for hoarding – for the kind of buy-to-stockpile mentality which has characterised the Premier League at different points in its past.

To pick an example at random, in previous years Nathan Ake might have chosen to move to Arsenal rather than Manchester City, reasoning that he would have more opportunity to start in north London. Now, not only does his chance of establishing himself at the Etihad seem more realistic, but Arsenal’s lost revenue and lack of Champions League football prevents that choice from even existing.

There have always been haves and have nots in English football, so this isn’t a new problem. What makes it seems unusually dangerous, though, is this sense that what happens over the next 10 weeks could feasibly have such a long-term effect. If talent is marched into these clubs in the anticipated volumes and everyone else behaves with the expected reticence, then the glass ceiling could soon become ironclad.

A fine collection of talent, remember, is not just a sporting asset, but a barrier to entry. What this swirl of circumstances has inadvertently created, with the help of UEFA’s trademark myopia, is a chance for the game’s cartels to entrench their positions for good.