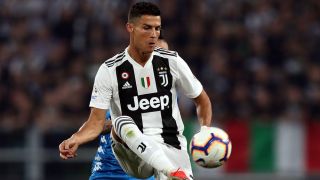 Alisson is disappointed he has missed out on the chance of playing against Juventus' Cristiano Ronaldo in Serie A but hopes new club Liverpool face the Ballon d'Or holder in the Champions League this term.

Ronaldo moved to Juve nine days before Alisson finalised his own transfer, leaving Serie A and Roma in a deal which could eventually cost Liverpool £67million.

Juve's signing of Ronaldo has been described as a major coup for both the club and Italian football, particularly given the Portugal international's significant contribution to Real Madrid's Champions League-winning campaign last term.

Although Alisson - who turned 26 on Tuesday - secured himself a big move and a step up, he concedes he would have liked to face Ronaldo in Serie A due to his admiration for the former Manchester United star.

When asked whether Ronaldo made Juve favourites, Alisson told Gazzetta dello Sport: "In Europe, many teams can win.

"Football always surprises you, who would have predicted Roma in the semi-finals last year?

"Juve was already very strong and then took Ronaldo. I'm sorry not to challenge him in the league, maybe it will happen in the Champions League.

"I am admired by the winning mentality of Ronaldo, as well as by talent."