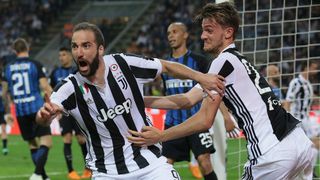 We are firmly into what Alex Ferguson termed "squeaky bum time" across Europe's major leagues and, although much has been decided already, there are some significant matches ahead.

The title race is over in Germany, France, England and now Spain, but it looks like Juventus and Napoli will be scrapping right to the wire in Italy.

Relegation places across the continent are also still to be decided, along with those all-important Champions League and Europa League qualifying positions.

With that in mind, here is a run-down of the permutations ahead of the latest round of matches in the Bundesliga, LaLiga, Ligue 1, the Premier League and Serie A, and a nod to the teams looking to join those leagues next season...

- Borussia Dortmund, who host Mainz on Saturday, will secure a top-four place if they match Bayer Leverkusen's result against Werder Bremen.

- Cologne have been relegated. Hamburg must win at Eintracht Frankfurt on Saturday to have any chance of guaranteed survival.

- Fortuna Dusseldorf have secured promotion from the 2. Bundesliga. Nurnberg will be promoted if they beat Sandhausen on Sunday, or if Holstein Kiel do not win at the leaders.

- Barcelona are champions. Atletico Madrid and Real Madrid are guaranteed a top-four finish.

- Valencia, who have the better head-to-head record against Real Betis, need a point to secure a Champions League spot.

- Malaga, Las Palmas and Deportivo La Coruna have all been relegated.

- Rayo Vallecano are two points clear at the top of LaLiga123, with five games to go.

- Paris Saint-Germain are champions. Monaco, Lyon and Marseille will finish in the European places. Lyon are second, a point above Monaco and two ahead of Marseille.

- Metz are eight points from safety at the foot of the table. They must beat Angers on Sunday to have any chance of staying up. They will be effectively relegated anyway if Lille do not beat Toulouse.

- Reims are Ligue 2 champions. Nimes secured promotion with a 4-0 win over Gazalec Ajaccio on Friday.

- Manchester United are guaranteed a top-four finish. Liverpool will manage likewise if they beat Chelsea on Sunday, and if Tottenham defeat bottom club West Brom 24 hours earlier, the Blues will have to win to keep their Champions League hopes alive. Spurs need five more points.

- Arsenal will be certain to finish sixth or seventh if Chelsea do not lose to Liverpool, or if the Gunners drop any more points.

- Burnley need one point to guarantee seventh and a Europa League spot (because United and Chelsea are in the FA Cup final).

- West Brom will be relegated if they do not beat Spurs, or if Swansea City at least match their result against Bournemouth.

- Stoke City will be down if they lose to Crystal Palace and either Swansea get a point or Southampton beat Everton.

- Wolves have won the Championship. Cardiff City will be promoted if they beat Reading on Sunday. If Fulham better Cardiff's result against Birmingham City, they will snatch second spot.

says the team's spirit will help to carry them over the finish line   May 2, 2018

- Leaders Juventus are four points clear of Napoli, who are guaranteed to finish at least second. If Juve beat Bologna and Napoli lose to Torino, Juve will be champions.

- Roma, Lazio and Inter can finish in the remaining Champions League places. Wins for the capital clubs this weekend would secure top-four finishes if Inter lose to Udinese.

- Empoli have been promoted from Serie B.