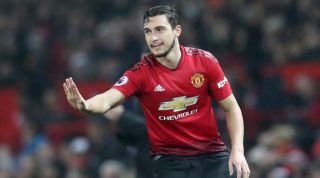 Matteo Darmian’s time at Old Trafford may be drawing to a close. Parma are reportedly interested in bringing the defender back to his native Italy, according to the Daily Mail. The 29-year-old only started six games last season for the Red Devils, has not played since April and could be the latest departure from United after Ander Herrera, Alexis Sanchez and Romelu Lukaku have also left the side over the summer.

Real Madrid and Paris Saint-Germain could be swapping their men between the sticks, according to The Sun. The Spanish giants are allegedly willing to let Keylor Navas join the Ligue 1 outfit but would want to bring in Alphonse Areola in return.

Los Blancos are also said to have turned their interest to Bruno Fernandes after giving up hope of bringing in Paul Pogba from Manchester United, The Sun says. Fernandes, who has scored 32 goals in 69 appearances for Sporting, has been capped by Portugal 13 times.

Chris Smalling has been linked with a loan move to Roma after falling down the Manchester United pecking order following the signing of Harry Maguire.

The on-off move of Neymar from Barcelona to Paris Saint-Germain has taken a step closer with the two clubs agreeing a fee, reports the BBC.

Paul Pogba: The Manchester United midfielder wants to join Real Madrid as soon as possible and will not renew his contract at Old Trafford, reports Marca.

Christian Eriksen: The Tottenham man will join Paris Saint-Germain if the French side lose Neymar to Barcelona, according to Le Parisien.

Jan Vertonghen: Bayer Leverkusen are keen on bringing in the Tottenham man before the European transfer deadline, writes Kicker.

FEATURE What's wrong with Tottenham? Why fans are frustrated – and it's nothing new