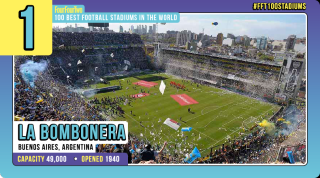 It’s an architectural wonder, a footballing pilgrimage that all supporters should make at least once in their life. And it came about thanks to a lack of space. The land that the club had for its small wooden stadium, stuck in the middle of the vibrant neighbourhood of La Boca, wasn’t big enough to build a huge concrete stadium for Argentina’s best-supported club, Boca Juniors.

But rather than look somewhere else and face the upheaval of leaving their spiritual home, the club came up with a solution for building a suitably sized stadium on the existing land. Their ambitious plan, conceived in 1934, consisted of three tiers and, with space at premium, a soaring vertical stand made up of seating areas stacked on top of each other.

The result was a distinctive D-shaped stadium with wonderful acoustics, a passionate cauldron that earned the nickname La Bombonera (or the Chocolate Box). The stadium is a temple of world football, according to the admittedly rarely understated Diego Maradona, who played here in 1981, again between 1995 and 1997, and then chose the stadium for his testimonial match where he lined up alongside Hristo Stoichkov, Ciro Ferrara and Davor Suker, among others.

The first tier was easy to build, merely replacing the existing wooden stands. The second was opened a year later, in 1941. But three tiers normally require much more space than was available at the compact Bombonera – the engineers had a vertiginous slope with which to work, a challenge they managed to complete by 1951. Watching a game from the gods remains, however, inadvisable for those without a head for heights.

A popular Argentine saying claims that La Bombonera no tiembla, late: the Bombonera does not tremble, it beats. It’s a living, breathing stadium. The combined effect of the fans singing, clapping and (especially) jumping makes the ground vibrate like a small earthquake.

Hernan Crespo, an icon for Boca Juniors’ city rivals River Plate, admits he was shocked when he made his first appearance there: “I thought my legs were shaking,” explained the Argentina international years later. “Then I realised it was the people. When you’re 18, as I was, it’s not easy.”

Uruguayan midfielder Ariel Krasouski, who won the league title with Boca Juniors in 1981, also felt the earth move under his feet on his introduction to the Chocolate Box.

“When I first entered La Bombonera, I started running to warm up and felt like the ground was shaking,” Krasouski recalled. “At first, I thought it was my legs, and I was worried. Was I so nervous that I was shaking? I’d always been a quiet guy, never felt the pressure.

“Then I realised that it wasn’t me, it was the ground. The ground was moving. Later, I realised it happened to all the players. When La Bombonera is full and all the fans are singing, it has that powerful effect on you. Not just mentally, but also physically.”

To be fair to Krasouski and Crespo, and hundreds like them, that movement was not just in their heads. The vast concrete stands do shake. Similar to the way buildings in San Francisco or Tokyo are built to withstand the shocks and tremors of earthquakes, La Bombonera’s tiers, designed by Slovenia-born architect Viktor Sulcic, also allow for some built-in movement to prevent cracking.

It’s not just young players who feel intimidated at this hulking stadium, either. In 2015, the official website for the Copa Libertadores ran a poll to identify the competition’s most ‘feared’ ground, with La Bombonera topping the list.

It’s not difficult to see why. In May 2015, visiting River players were attacked with pepper spray, while Boca Juniors have had to contend with seven stadium bans over the last 10 years – one of them for allowing a fan to invade the pitch during a Copa Libertadores match, punch Guadalajara player Bofo Bautista and escape.

La Bombonera is most definitely not a place for the faint-hearted. Opposition players regularly run a gauntlet of missiles and abuse to take corner kicks, adding to a febrile atmosphere that has helped Boca to a record of only 11 Copa Libertadores defeats at their iconic home, winning nearly 80% of the games played.

Just watching the Boca crowd, el Jugador Numero 12 (the 12th player), can be worth the entrance fee, even in the dullest of 0-0 draws. Among the seething mass of fans singing and jumping, those standing on the avalanche barriers are the barra bravas, Argentine ultras who run a lucrative sideline charging European tourists for the “adrenaline tour” that allows them to become a Boca ultra for a day.

The big question about La Bombonera surrounds its future. The stadium’s official capacity, currently close to 50,000, will reduce by almost 15,000 seats by 2017, when new FIFA rules for all-seater stadia come into effect for a club that has more than 110,000 active members.

The run for presidential elections, scheduled for December 6, is mostly about what comes next for the beloved stadium. Some say a new ground has to be built, even if it’s not in the neighbourhood; others propose leaving La Bombonera untouched and constructing a new home next door, at Boca’s training ground Casa Amarilla. Another proposal is to buy all the properties behind the west stand, tear down the existing suites and add a fourth tier.

But in the meantime, La Bombonera keeps beating. If you have ever experienced the pulse-quickening excitement of attending a match there, placing it as our No.1 is the completely obvious choice. If you haven’t… what are you waiting for?

• How we chose the list
• A brief history of football grounds, by Simon Inglis
• The greatest stadiums that never were
• Who the hell is Santiago Bernabeu? Named stadiums explained
• QUIZ How many of our 100 have you visited?
• Archibald Leitch: the man who invented the football stadium
• The world's biggest stadiums
• QUIZ Higher or lower? Take our stadium capacity quiz
• How to build a football stadium, by those who did
• The 11 weirdest stadium names
• In memoriam: Britain's great lost grounds
• QUIZ Name that stadium
• Coming soon: The new stadiums being built and planned
• The most beautiful grounds in the world
• GALLERY 9 of the best from the '90s