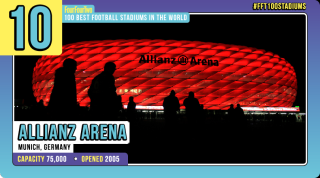 It was when the Allianz Arena began to cause 10 road accidents a day that the German authorities knew they had to act.

There are few greater sights in football than the exterior of the Allianz on matchnight. On a clear evening, the shimmering lights from Munich's luminous Schlauchboot can be spotted from the Austrian mountain-tops 50 miles away.

Unfortunately, drivers on Munich's northern autobahn had a somewhat closer view, and were paying rather too much attention to their city's new stadium and its pretty colours. A spate of car crashes later and the police decided to lay down new ground rules. The previous multi-colour combinations beaming out from the Allianz Arena's 2,874 plastic panels were banned, colour changes allowed no more frequently than once every half hour.

The safety clampdown did nothing to diminish the majesty of the €340m stadium. Instead the arena radiates a simple but vivid red on Bayern matchdays, blue if it's 1860 Munich in residence or white if it's the national team.

Accessible via the city’s metro system, the venue – opened in 2005 and extended to a 75,000 capacity last year with the installation of extra seats in the upper tier – is pretty impressive inside as well, the epitome of everything a modern super stadium should be.

All of its three tiers were rocking as it helped to kick off the 2006 World Cup in style, Philipp Lahm's sixth-minute curler putting Germany on course for a 4-2 win over Costa Rica. It would also host the semi-final too, a less dramatic 1-0 victory for France over Portugal thanks to Zizou’s penalty.

In just 10 years, already it has history. It's the home of one of the great Bayern sides: the side that thrashed Barcelona 7-0 on aggregate en route to Champions League glory in 2013. The home of Robben, Ribery, Lahm, Muller, Neuer, Lewandowski, Schweinsteiger, Guardiola et al.

The home, too, of their most dramatic anguish, the Champions League final of 2012. The night that Chelsea, finally, became European champions – in Bayern's backyard. The night of Petr Cech's penalty saves and Didier Drogba's decisive spot-kick. The night of the suspended John Terry celebrating in full kit.

Financial services company Allianz purchased the naming rights for the stadium for 30 years in 2005, when Bayern held joint ownership of the arena with 1860, but it has been called several different things.

The Schlauchboot, or ‘rubber dinghy’, is just one of several nicknames the stadium has taken on since its opening. Most, like the Autoreifen (the car tyre) or the Luftkissen (the hovercraft) have originated from its novel exterior. A German comedian gave it the moniker of the Weißwurststadion (the white sausage stadium).

More latterly, though, it has sometimes been labelled the Arroganz Arena amid protests that some of the stadium rules were not sympathetic to fan culture.

Having the largest car park anywhere in Europe, comprising of 11,000 spaces, was all very well. As was a safe standing section for Bundesliga matches, as well as the relatively novel cashless stadium philosophy – with all food and merchandise inside the arena purchased only via an ArenaCard.

But basic items like megaphones and large pennants were banned, while the presence of a fence and safety nets in front of the Sudkurve, where Bayern's ultras are located, was also unpopular. Amid it all, though, Bayern the team have marched on regardless. There are few greater fortresses in world football than the Allianz in the Bundesliga.

From Olympic bowl to bespoke

Bayern had left the Olympiastadion after only 33 years, having moved in when the stadium was built for the 1972 Olympics. The Olympiastadion had been the venue for the 1974 World Cup Final, Marco van Basten's volley in the Euro '88 final and three European Cup finals, as well as a certain 5-1 victory for England over Germany in 2001.

But already it was looking old, and its basic design – an open bowl with running track and only partial roofing – left many spectators exposed to the elements. Munich needed a new stadium for the 2006 World Cup and the Allianz Arena was the end result.

1860 Munich's decision to move in too was controversial among their own fans. They had their own home until 1995, the world-weary Grunwalder Stadion – the venue for Monty Python's philosophers' football match, no less. Then die Löwen moved into the Olympiastadion, before deciding to follow Bayern to the Allianz.

As it happened, 1860 played the first game at the stadium, against Nurnberg, and also won the first derby at the venue – beating Bayern 1-0 in a friendly thanks to a goal from every Bristol City fan’s favourite Aussie, Paul Agostino.

But their 50/50 share of the stadium had been relinquished before the World Cup had even taken place. In April 2006, cash issues led to 1860 Munich selling their share to Bayern for a reported €11m. The deal saved the club from insolvency and also gave them the option to buy back their stake in the stadium by 2010, but they had relinquished that right by 2007.

Their contract ties them into playing at the stadium until 2025 but their average attendance has dwindled from 41,000 to 21,000 without the lure of top-flight football. When rent is factored in, often they make a loss on matchdays.

The second-tier side have started to seriously look into the possibility of moving out. Negotiations are reported to have taken place to terminate their lease, with talk of a potential move back to the Grunwalder ahead of the building of a new home on the site of the hockey arena in the old Olympic park.

The Allianz could soon be Bayern’s alone, then. Germany’s biggest club museum, the exciting-titled Bayern Erlebniswelt (Bayern Adventure World) opened at the arena in 2012. One suspects that Das Schlauchboot will deliver plenty more history in the years to come.