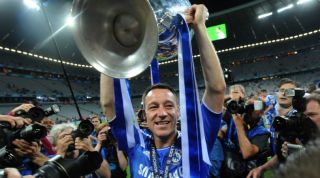 Jadon Sancho is set to make his first Champions League appearance in England tonight when Borussia Dortmund take on Tottenham at Wembley. At just 18, he has plenty of time ahead of him to rack up games in Europe’s premier competition.

But the south Londoner has a long way to go before he catches up with some Englishmen who made the Champions League a second home over the past two decades.

So FFT’s task for you today is a simple one: name them.

From the man in top spot with 124 appearances down, we want you to name the English players who recite “The chaaaampions!” in their sleep.

We’re only including the post-1992 Champions League, so any appearances in the European Cup before that don’t count (soz), and we’ve put an asterisk next to any players still plying their trade at the club named.

You have a generous 10 minutes to name the 51 players from England who have played the most Champions League matches. Let us know how you get on at @FourFourTwo and see if you can make it onto our daily Twitter leaderboard. Good luck…

THEN READ…Who do FourFourTwo writers think will win the Champions League this season?