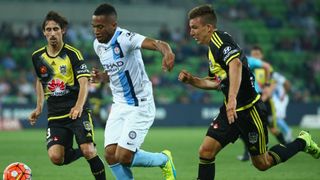 Melbourne City continued their fine home form in the A-League with a 3-1 victory over Wellington Phoenix at AAMI Park on Monday.

John van 't Schip's side made it four wins from five league games at home, a run in which they have scored 15 goals.

Harry Novillo scored twice against Wellington and Bruno Fornaroli grabbed his 13th of the season to take the hosts up to second.

The visitors scored a stunning consolation through Roly Bonevacia, but they remain eighth amid a seven-match winless run.