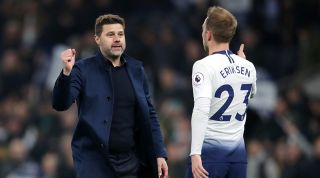 Mauricio Pochettino will be offered more than £300 million to spend on players over the summer should he join Milan. The Serie A giants want the Spurs man to replace Gennaro Gattuso in the San Siro hot seat, reports the Daily Mirror.

Chelsea, currently subject of a transfer ban, are looking to sign Athletico Paranaense’s Brazilian midfielder BrunoGuimaraes if they get the embargo lifted, according to the Daily Mail.

EdinDzeko could return to the Premier League, as the Daily Express reports that Manuel Pellegrini is interested in bringing the Bosnian in from Roma. Dzeko, 33, scored 50 times in 130 appearances for Manchester City, then managed by Pellegrini.

Manchester United are running the rule over PSG and Belgium right-back Thomas Meunier, the Sun claims.

Leicester are among five Premier League clubs who are keen on signing AleksandarMitrovic from relegated Fulham, the Leicester Mercury says. Everton, Southampton, Tottenham and West Ham are also keen on the 24-year-old, the paper adds.

Kepa Arrizabalaga: Real Madrid will make a move for the Chelsea and Spain goalkeeper over the summer, reports Teamtalk.

QUIZ Can you name the 29 managers who’ve taken charge of three or more Premier League clubs?