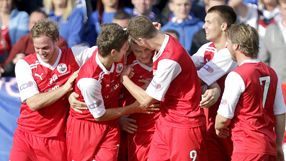 Rangers, 54-times Scottish champions, were forced to relaunch in the third division after collapsing under crippling debts.

They are overwhelming favourites to win promotion but have slipped to third in the table after an underwhelming start that has included three league draws to add to Saturday's defeat.

Stirling, who began the day bottom of the table, claimed victory thanks to a goal from Brian Allison after 10 minutes.