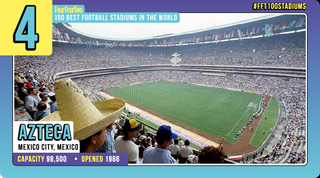 They say it’s the third­-biggest stadium on Earth. It’s certainly the only one to have hosted two World Cup finals. (Warning to pedants: Maracana hosted the 2014 final, but the last act of the 1950 event was a round­-robin game that was merely coincidentally vital.)

Besides being a giant, the imposing Azteca is also famous for becoming an eyewitness to history. No other ground can claim to have been present when the sport’s two most celebrated protagonists pulled off their greatest miracles. Shakespeare said that all the world’s a stage and all the men and women merely players; the planet’s two finest footballers had their finest hours centre­ stage at Azteca.

Pele’s stunning athletic superiority could be seen at his peak here in 1970, as he led one of the best teams of all time, the one that included five No.10s revering the ball at all times; 16 years later, Diego Maradona’s brilliant dribbling also brought Azteca to its 230,000 feet.

“And it wasn’t a pleasant experience, mind you,” complains Maradona to this day. “Playing here at noon – it’s devastating, and the grass was in awful condition.”

It was at Azteca (where else?) that the iconic Hand of God and the Goal of the Century against England took place, as Argentina advanced to the semi-­finals against Belgium – another two-­goal Maradona exhibition at Azteca.

What’s more, Azteca also hosted the so­-called “match of the century” – Italy 4­-3 West Germany in the 1970 semi­-finals – and was the chosen ground for the Olympic football tournament of 1968.

The name pays homage to the indigenous people who inhabited central Mexico before the Spanish conquistadors came along. And even if it doesn’t resemble the impressive temples of the Aztecs or the pyramids of Teotihuacan 30 minutes outside the city, being inside is almost a religious experience of its own.

The stadium is built on lava ground of the extinguished volcano Xitle; about 60,000 square metres were blown up with explosives in order to level the land and start the construction, in 1962. The project figures are also impressive: 12 architects working together, with 34 engineers, 15 technicians and 800 workers, day in, day out, until its completion.

Unlike many buildings in downtown Mexico City, the surface of volcanic rock makes it one of the more stable constructions in a volatile earthquake zone.

Coming away from a car park big enough to hold 10,000 vehicles, fans are welcomed by the sculpture on the esplanade Tlalpan, the red sun, donated by American sculptor Alexander Calder.

It opened in 1966 with an entertaining 2-­2 between Club América and Italian visitors Torino. América are Mexico’s most successful club and are based at Azteca, which like them is owned by media giants Televisa; down the years, the stadium has also been used by Necaxa, Atlante, Cruz Azul and Atletico Español.

Sometimes, the pressure of the crowd can become overwhelming. Club América manager Manolo Lapuente once infamously insisted that “If the fans want spectacle, better head to the circus: this is football”. He was sacked shortly afterwards.

A symbol of national passion way beyond football, Azteca was the chosen spot to mourn the genius Mexican comedian Roberto Gomez Bolaños (Chespirito), revered in Latin America and Spain, when he died in November 2014.

“When I was a child, I met Stadium Azteca. I was shocked, watching the giant crush me,” wrote popular singer Andres Calamaro in lyrics dedicated to El Azteca.

The game’s greatest names can’t get enough of it. “Being here at the Azteca is marvellous,” declared Iker Casillas when Spain visited the country. “This is a fascinating stadium where some brilliant pages of the history of football were written.”

Even the country’s greatest rivals are taken in by the love of it. Questioned by Mexican journalists angry at the impossibility of playing the derby against the USA on home soil, Jürgen Klinsmann happily admitted: “I would have preferred to play at Azteca, rather than in Pasadena, that’s true. It’s an amazing stadium.”

From Libertadores and Confederations Cup finals to NFL games, Azteca has always been ready and, despite its huge capacity, is frequently full.

“This is an impressive stadium, a place that smells of football,” said Diego Simeone before a recent pre-season friendly involving his side Atletico Madrid. “You only need to set a foot on the ground to feel the motivation. It happened to us a few years ago when we came with River to play Copa Libertadores.”

It’s also a very tough stadium to play in. The atmosphere can turn thick and the altitude, despite being lower than the FIFA-­stipulated ceiling of 2,500 metres, makes it a complex scenario for away teams.

“On top of that, you have the heat, and the smog, factories that have been working all week... that makes you feel even worse, as if all the heat is over your head. But if you play at night, that leverage disappears for them,” reckoned former US defender Marcelo Balboa.

Several renovation projects have been recently considered. The current favourite, Azteca Forum, includes the construction of a 145,0000-square metre shopping mall and a recreation centre to help the stadium be part of the local Santa Ursula community.

Doubts remain over how exactly the stadium should be renovated, but they’ll have to decide soon: it should be ready by 2019, as Mexico ponders a potential bid for a third World Cup in 2026 and 2030. And perhaps then, after Pelé and Maradona, it will be time to see the best player of the 21st century enjoy his finest hour at one of football’s best venues.