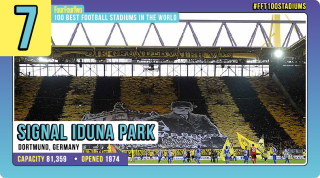 Borussia Dortmund fans have a special relationship with their club's ground. That's not just because of its beauty, so classic and timeless that The Times six years ago named Signal Iduna Park the world's best football stadium. Neither is it only because of the ground's unique atmosphere, which can feel like a throwback to the days before football's gentrification, thanks mainly to the largest terrace in Europe – the famous Südtribüne.

No, the main reason why the stadium is not just a building but feels almost like a living, breathing being to the fans is that it has played a crucial role in Borussia's history on numerous occasions. Ten years ago, for instance, the ground almost triggered the club's demise. Some 40 years ago, it saved Borussia, certainly from anonymity, perhaps even from bankruptcy.

To understand why this is the case – and why the ground's perfect simplicity is by and large an accident – you have to go back to the mid-­1960s. At that time, Borussia were one of the best teams on the continent. They had just become the first German club to win a European trophy, defeating Bill Shankly's Liverpool in the 1966 Cup Winners' Cup Final.

But the club's municipally ­owned ground – Rote Erde, literally “red soil” – was a cause for concern. It was outdated, too small and almost impossible to police. The problem was that the city of Dortmund, hit hard by the steel and coal crisis, had no money to modernise the ground or build a new one.

An opportunity arose when West Germany was awarded the 1974 World Cup. Dortmund applied to become a host city, knowing there would be considerable state funds to construct new stadiums. But when the city fathers received the German FA's requirements for World Cup grounds, their hearts sank.

The DFB demanded a running track, a minimum capacity of 60,000 and at least 30,000 seats. Such a ground would cost 60 million Deutsche Marks (then the equivalent of £7.5m) – way too much for Dortmund, even with government support.

And so the city came up with a plan for a no-­nonsense, functional and pre-fabricated ground that could hold 53,600 (more than 37,000 of them on two large but modern, safe terraces). It would, of course, have no running track and cost only 33 million Marks.

The DFB was underwhelmed. When the officials saw the drafts, Dortmund's World Cup bid was unceremoniously rejected. Cologne, the country’s fourth-biggest city, got the nod instead.

While the stadium question dragged on, Borussia ran into problems on the Rote Erde pitch. The club's former glory faded fast and eventually the team was relegated from the Bundesliga. Soon average attendances sank below the 9,000 mark and Borussia were hemorrhaging money until bankruptcy seemed imminent.

But there was a silver lining. In late 1971, Cologne had surprisingly withdrawn its World Cup application due to escalating costs. With the tournament less than three years away, the DFB had no choice but to give Dortmund the green light.

The simple, unglamorous Westfalenstadion would host the likes of Johan Cruyff's Holland during the World Cup – and become Borussia's new home (although before construction could begin, workers had to defuse no fewer than 34 unexploded Allied bombs).

The new ground was immediately lauded as "an English­-styled stadium" (with an atmosphere to match) by the press, and it also proved an instant hit with the fans. While attendances soared, the club won promotion back to the Bundesliga in 1976 and have been there ever since.

Despite four decades of continuous presence in the top division,  it took many years before Borussia became the powerhouse it now is – and before the ground became a myth rather than just a very nice place to watch football.

Both happened in the early 1990s. On the field, coach Ottmar Hitzfeld built a young, exciting team that thrilled the fans. Off it, while the Taylor Report buried the traditional British terrace, the Südtribüne became a tourist attraction.

People who supported other teams would travel to Dortmund just to stand on the jam-­packed terrace and experience what can only be described as a party atmosphere, illuminated by dozens of then still­tolerated flares.

The Bundesliga had won an exemption from UEFA's all­-seater rule because there had never been a stadium disaster in Germany. Yet that doesn't mean the clubs weren't tempted to follow the British model. Borussia seriously considered turning both terraces – the north and south stands – into seated areas.

Various fan pressure groups exercised all their powers of persuasion until the club officials finally changed their minds. A small standing area would be preserved in the north to offer cheap tickets for travelling fans, while the south stand remained a terrace – with removable seats for continental and international games.

In fact, the club soon made the terrace even bigger. Borussia bought the stadium from the city and added tiers to all four stands between 1996 and 1998. The Südtribüne, which soon came to be known as the Yellow Wall, now held 24,454 and was the largest terrace on the continent.

Another World Cup... and trouble

When the reunified Germany was awarded another World Cup, Borussia looked to welcome the world to Dortmund. In a complicated deal, the club sold the ground to an investment fund and used the cash injection to bring the Westfalenstadion up to modern FIFA standards and close the corners.

The stadium, to be known as Signal Iduna Park after the naming rights were sold to a local insurance company, now held more than 80,000 and was so shiny it hosted the famous World Cup semi-­final between Germany and Italy in 2006.

However, it also threatened to become a white elephant. The annual rates Borussia had to pay in order to gradually buy the ground back from the investment fund were crippling.

In 2005, the club could no longer shoulder the costs. If the investors hadn't agreed to a deferment of payment during an emergency meeting of nail­-biting intensity, Borussia Dortmund would no longer exist – and the stunning renaissance under Jürgen Klopp would never have happened.

But all's well that ends well and Signal Iduna Park has since become such an iconic destination that the BBC reported last year it's "attracting more than 1,000 fans from England" to every game. It’s not just people from Dortmund that have a special relationship with the ground.