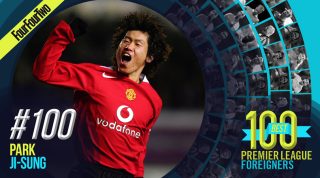 The Korean’s arrival for just £4m in 2005 helped the Premier League to become a sensation back home – so much so, Alex Ferguson had to deny he’d been signed to boost Manchester United’s shirt sales in Asia. True enough, Park’s near-infinite reservoir of attacking running, defensive diligence and tactical intelligence made him a fans’ favourite at Old Trafford.

He was a manager’s favourite, too, his importance growing as years passed and, paradoxically, first-team outings became rarer. In a squad packed with natural talent, it was Park who started the 2009 and 2011 Champions League finals, after Ferguson admitted that leaving the midfielder out of the 2008 showpiece was the hardest decision he’d ever made. AH

Following his protracted £13m transfer from Bordeaux, completed weeks after he’d scored France’s winner in the Euro 2000 Final, Arsenal’s then-record signing sometimes appeared to labour in the lengthy shadow of his Bleus team-mate, Thierry Henry. Wiltord, a winger, expressed a desire to play as a central striker, only to be regularly rebuffed by Arsene Wenger.

Yet Gunners fans owe Wiltord a huge debt of gratitude for his goals in their team’s Double-winning campaign. His freakish winner at Goodison Park in February sparked Arsenal's 13-match winning run, and his decisive strike at Old Trafford in May 2002 confirmed the Londoners as Premier League champions. JS

The flying winger made defenders' lives miserable after joining Manchester United in March 1991, and played an oft-forgotten part in the club’s transformation into serial winners.

Kanchelskis lifted two Premier League titles, the FA Cup and the League Cup before leaving United a healthy profit, Everton paying a club-record £5m for their £650,000 investment. His superb performances in the Toffees’ impressive 1995/96 campaign drew illustrious suitors, and after moving to Fiorentina for £8m he’d return to England only for fleeting spells with Manchester City and Southampton.

Most important of all, however, Kanchelskis patented not one but two of the most pointless skills ever seen on a football pitch. RE

While the name might mean little to today’s generation, Ndlovu brought class when foreign players were a Premier League rarity. He’d go on to win 100 caps for Zimbabwe, but even as a teenager he was key for Coventry City (another name who’ll resonate with few Premier League fans today).

In a struggling side Ndlovu was a constant nuisance, if not a prolific one, to opposition defences. The striker was largely responsible for maintaining Cov’s 34-year residence in the top flight, before dropping a division in 1997 to improve Birmingham, then Sheffield United. He’s still remembered fondly in the Midlands. RE

The Ballon d’Or winner joined Chelsea for free in 1995 as part of a Glenn Hoddle recruitment drive that also included Dan Petrescu and Mark Hughes. The Dutchman may have been past his legendary best, but his arrival nonetheless signalled the Premier League’s intent to compete with Europe’s top divisions.

Starting London life as a sweeper before moving into Chelsea’s midfield, Gullit became a dominant presence so quickly that even with the Blues finishing 11th, he was named runner-up to Eric Cantona as Footballer of the Year.

Within a year of his arrival he became player-manager, replacing England-bound Hoddle. Gullit promptly won the FA Cup, Chelsea’s first silverware since 1970. RE

Forget the QPR episode, which ruined his reputation in England, and remember that between 2007 and 2012 Samba was one of the most aerially dominant defenders in the Premier League. Though it’s hard to imagine now, he was a key component of a Blackburn side who could – perhaps should – have climbed higher up the table.

Various factors contributed to his stagnation, but his big-money move to Anzhi Makhachkala and the racist abuse that followed were paramount. When he returned to England less than a year later, the Congolose centre-back was a shuffling imitation of the player he had been. SSB

Pick someone at random and ask them who’s made the most Premier League appearances of any foreign outfield player (and the most of any foreigner bar Mark Schwarzer). It’s unlikely they’ll be correct. Yet it was his under-the-radar, no-fuss performances in defence that earned Distin that accolade, even if they brought him little recognition in England and none in his home country – something he acknowledged with good humour in 2014.

If Manchester City saw the most of Distin, either side of stints with Newcastle and Portsmouth, Everton saw the best. A classic David Moyes signing, he gave the Toffees’ backline experience and solidity across six seasons.

A year with Bournemouth was ill-advised but took Distin to 469 Premier League appearances, which won’t be topped for some time (his nearest active rival, Gael Clichy, has 313). He’s still a free agent, so expect him to rock up at Moyes’s Sunderland any day now. HD

Senegal's World Cup squad had made zero Premier League appearances between them when they shocked holders France and reached the quarter-finals in 2002, but 10 of the 23 would end up in England's top flight. In fact, El-Hadji Diouf and Salif Diao had agreed moves to Liverpool before the World Cup began.

Neither had much fun at Anfield (and Diouf is detested there even now for his continued attacks on club legend Steven Gerrard) but the forward enjoyed greater success at Bolton as the talisman of a team that twice qualified for Europe.

Diouf courted controversy but Sam Allardyce handled him well, and later took him to Blackburn from Sunderland. CF

One day, Lukaku might be less polarising. His one-in-two strike rate will eventually be married to a more rounded game, and when that point arrives, he really will become an apex predator.

But those are concerns for tomorrow. Today, Lukaku is already an eclectically talented goalscorer as dangerous with his feet as he is in the air. His large frame disguises an occasional delicacy when inside the goalkeeper's shadow, and his current progress, when charted by goals (76 in the Premier League) and age (23 years), puts him in very special company.

If, in five years' time, he is not regularly playing in the latter stages of the Champions League, somebody somewhere will have failed. SSB

After his stunning performances at Euro 2008, the diminutive Russian joined Arsenal in the freezing January 2009 window and immediately injected panache into a team that was labouring outside the Premier League’s top four.

Arshavin’s pace, directness and willingness to shoot from range widened their attacking options, until his joie de vivre disappeared when he was made to plough a lonely furrow up front during another prolonged Arsenal injury crisis.

Yet Gunners fans will never forget that remarkable four-goal salvo in a 4-4 draw at Anfield two months after his debut. That night, they saw Arshavin at his brilliant best. JS