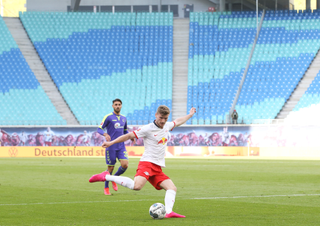 Tottenham’s Champions League game against RB Leipzig seems like a lifetime ago now. The hosts won a processional game 3-0 and advanced in the tie, but it remains significant for being among the last few games in Europe to be played in front of a crowd.

There’s a more detailed account of that night here, but a few things have stuck me over the past few weeks.

First, how easy the experience was. The Germans seem to have a more benevolent view towards their football fans and that manifests in a variety of ways. There was a minimal police presence on the streets that night. Also, the transport links to the ground were excellent. The Red Bull Arena is walkable from the centre of town, but the trams and buses shuttling supporters in worked extremely well and, unlike in England, did so without that overt weariness of anyone who happens to be a football supporter.

That’s a relevant observation now because, back in England, football has suddenly remembered that fans are quite an important part of the process. At the time of writing, the Premier League and its rights holders are debating ways of enhancing the in-stadium aesthetic in the event of behind-closed-doors matches. As and when the competition resumes, all parties want a product that properly represents the brand that has been built and – obviously – that involves replicating the crowds which have been lost.

It wants piped-in noise, holograms, flags and atmosphere. On hearing this, of course, the match-going fans can afford themselves a smirk, because British football has – indirectly or otherwise – been as obstructive as possible to those energies remaining in stadiums. Most obviously in the pricing of tickets, but in all sorts of other ways, too, not limited to the alcohol restrictions, the way stewards behave, how grounds are policed and – more subtly – in the tacit discouragement of the train timetables and the conditions suffered within overcrowded, overpriced carriages.

The general response to that might be that fans deserve it, that the past behaviour with which they’re associated demands that they be treated with suspicion. But that seems to depend on the tenuous assumption that British supporters are unique in the world. Or that the pejorative attitudes towards them have been earned, rather than artificially cultivated by inferior conditions and maltreatment.

It’s not quite that black and white, admittedly, but then neither has nuance – or even historical accuracy – ever been much a part of that argument.

The more pertinent question, though, is what happens next. Can the truths exposed by the coronavirus outbreak help to catalyse meaningful change in football? Not in the transfer-market or upon its structure, but in how it thinks and acts – how it treats people?

The reflexive answer is no, because impulse suggests that football will revert to type as soon as it’s allowed. But maybe it’s in the game’s interest to be more conciliatory? Perhaps faced by this kind of situation in the future, the reaction to its attempts at self-preservation (furloughing staff etc) might be less fierce if consideration for, and acknowledgement of supporters becomes permanent.

Fundamentally, maybe the realisation that football needs to make is that, whatever the situation and whatever its response, it is always assumed to be acting in a villainous and self-interested way. It may not enjoy such self-reflection, but it’s necessary.

And why can’t that change? Why can’t supporters matter like they do now all the time – when there isn’t a camera around, when there’s isn’t a public relations cache to exploit and when there isn’t social media hay to harvest.

That can be interpreted in all sorts of ways, but the general message is that, having been given a stark reminder of what its essence actually is, the sport could use this as a prompt to redesign its relationship with the public. Or even just soften some of its edges, or dilute its ‘pay-up-or-go-away’ message.

Maybe there could be greater understanding for the distances undertaken and the costs paid during a season? Perhaps, having recognised that vulnerable people are worth a phone call from a full-back or centre-forward, clubs could find a way of helping when there isn’t quite as much focus. After all, while the world will eventually recover, there will be many who remain disadvantaged and fragile, and who are mired in difficulties that can’t be cured by vaccine.

Television isn’t immune from this, either. With the irony of watching the scramble to replace what has long taken for granted, perhaps the hope is for broadcasters to treat football’s people more preciously in future. Do Newcastle need to play at Southampton on a Friday night? Should Burnley be at Spurs at 4pm on a Sunday?

Is the sport’s humanity really so expendable? Is it possible to be both a business and a community’s big brother?

These are the questions that football should be asking; it has never had less excuse to play dumb.