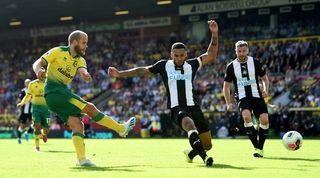 Pukki joins a select group of Finnish footballers to score in the biggest league in the world; just 11 have managed it.

He’s far from the first Nordic player to enjoy success in the top flight, though – some of the first imports to flourish in the early days of the Premier League were from the lands of thick-knit jumpers and moody crime dramas.

In fact, since 1992, 34 players from Nordic countries – that’s Finland, Denmark, Sweden, Norway and Iceland – have netted at least 10 Premier League goals. (The one Faroe Islander to make a Premier League appearance, Manchester City goalkeeper Gunnar Nielsen, sadly did not score.)

Our challenge for you today is to name all 34. We’ve put 10 minutes on the clock for you to get them, from Manchester United’s goal machine to a dependable Fulham centre-half. See how many you can name – or how quickly you can get them all – and send a screenshot to @FourFourTwo for your chance of getting on our daily leaderboard.

Pukki's four strikes means he's not on the list yet, but surely it's only a matter of time...

QUIZ How many of the 78 players aged 23 or under who've featured in the Premier League this season can you name?