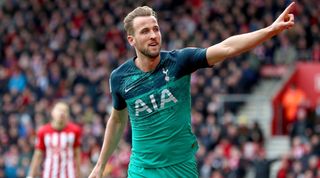 As the Premier League season settles into its final week, there’s not much left to be sorted. Relegation: done. Champions League spots: done. First place outside the top six: done. Sure, there’s that little matter of the actual champions to determine, but will that really bring an exciting final day?

So allow us to look a little further and leave the club scene behind. For what’s that on the horizon? Summer international football ahoy!

It’s now less than a month until the Nations League finals in Portugal – a tournament made all the more prestigious by the fact that England go into it as favourites.

Time to assess how English players have done this season, then. Who will be banging them in for the Three Lions over that glorious five days in June, and bringing football home once again?

We’ve put together a list of every English player with at least three goals in the Premier League this season – and to help you out, you get their club, the numbers of goals they’ve bagged and seven minutes to name them.

Screenshot your result (no spoilers, please) and send it to @FourFourTwo on Twitter to see if you can make our daily leaderboard.

Andy Mitten column: At Manchester United, things are very bad – and could get worse

Quiz! Can you name all 52 Liverpool players to score in the Champions League?