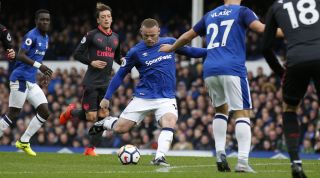 We all know the feeling: that name on the teamsheet in the opposition, the blood runs cold and the thought ‘but he always scores against us’ runs through your head.

This can be because a particular player scores against everybody - or because he stores up his season’s goals for a particular opponent. This weekend it was a bit of both, as a north London club faced a player who’s been scoring against them for 15 years and hasn’t stopped yet.

But can you name all of the players with a history of scoring against the same opponents? Using data from Transfermarkt, we’ve listed the players with the highest Premier League goals record against a certain opponent.

A note before you start: we’ve listed every club to have participated in at least three Premier League seasons. Anything else is just too small a sample size.

Now, six minutes are on the clock, club and goals against are on the left – player nationality and position are on the right. All you need to do is name the scorer, let us know how you got on @FourFourTwo, then challenge your own fierce rivals to play.

(Note: Adblockers can stop you seeing our quizzes – please turn them off. Thanks!)