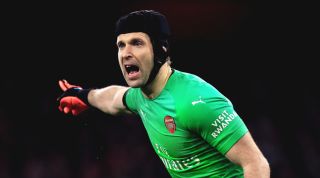 Ten minutes on the clock, 50 players to guess - that's the top five per season for the last ten years.

NOW TRY Quiz! Can you name the top-scoring trios in Europe this season?

The goalkeeper was never just a position on the football field. It's a way of life. A strange liminal space between football and other sports.

Traditionally, the keeper is either the most reliable member of a team or the barmiest, but the best have always combined the two. Think Jerzy Dudek's wobbly-kneed heroics for Liverpool, Jens Lehmann's bonkers rants at referees for Arsenal or Fabian Barthez being Fabian Barthez for Manchester United.

In recent times, however, keepers have been far less weird, falling in line in with their teammates to become the same well-groomed, Beats headphone-wearing, product-endorsing 20-somethings of the game. No longer the gruff madman shouting from their own area.

Keepers may not be as crazy as they used to be, but they still hold a special place in our hearts. Today, we'd like you to name the five with the most clean sheets every season for the past ten.

MANCHESTER UNITED Glory, glory Marcus Rashford: Why the 2020s are going to belong to the Manchester United forward