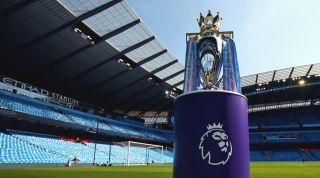 The Premier League is set to return on June 17, with the last nine rounds of fixtures taking place over the summer.

Here are all the questions that you may have about the return of the top flight in England.

What will the new Premier League kick-off times be?

On May 28, it was announced that Premier League matches would recommence on June 17, subject to safety requirements, three months after the competition was put on hold due to the coronavirus pandemic.

Aston Villa vs Sheffield United and Manchester City vs Arsenal will be the two first games back. The original matches were postponed so that Villa and City could compete in March's League Cup final.

The remaining Premier League matches will be staggered throughout the weekend and midweek, with matches potentially taking place on every day of the week.

The 16 different kick-off times are:

How will the games be televised?

We’ll have 4 live Premier League games on @BBCSport. The first time ever that we’ve had such an opportunity. Very exciting. 👍🏻May 28, 2020

All 92 remaining matches in the Premier League will be broadcast; some of which will be shown live on the BBC for the first time.

Sky Sports will broadcast 64 of the 92 Premier League games live. They will make 25 of those matches available free-to-air.

BT Sport, the other main broadcaster, will show 20 of the games. The company will also be offering customers a further bill credit to the value of 50% of their BT Sport monthly subscription.

BBC and Amazon Prime both have four live matches each.

You can find out how to watch every televised Premier League game here.

Following the midweek fixtures of Aston Villa hosting Sheffield United and Manchester City playing Arsenal, a full round of fixtures will take place on the following weekend.

While the exact fixtures have yet to be announced, Matchday 30 was set to be as follows:

When can Liverpool win the league?

Before lockdown begun, Liverpool were just two wins from their first league title in 30 years. Really, COVID-19 could barely have come at a worse time for the Reds.

The same obviously still applies now, but with Man City in action with their game in hand on the Wednesday before Liverpool's first match back, Arsenal could Jurgen Klopp's side a massive favour. Should the Gunners beat City, Liverpool could wrap the league title up with the next game - against Merseyside rivals Everton.

You can find out more about Liverpool's potential title-winning game here.

Will matches be played at neutral venues?

Talk of Premier League taking place at neutral venues has rumbled on throughout lockdown. Understandably, the police are keen to avoid situations in which large groups may gather - notably for Liverpool's title-winning match, whenever that may be.

No matches have so far been announced as taking place at neutral venues.

Will crowd noise be piped into the games?

There has been a lot of discussion about the nature of playing matches behind closed doors and how that could affect the Premier League. As seen with the Bundesliga, home advantage becomes minimal with no crowd behind the side.

While there has been talk of an app producing crowd sounds in the stadium depending on user interactions from fans back at home, it isn't likely to be adopted in time.

Instead, it's thought that broadcasters will offer crowd noise as an option on the Red Button, just as alternative commentators are sometimes on offer.