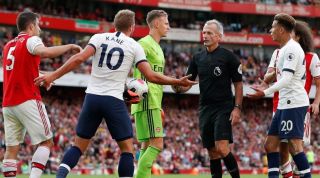 Want to watch the Premier League this weekend? See our live stream guide to watch every game

Norwich City could become the first team to be relegated from the Premier League five times when they host West Ham on Saturday lunchtime.

Daniel Farke’s side are 10 points adrift of safety at the foot of the table and to make matters worse, the Canaries will be without midfielder Todd Cantwell this weekend.

Defeat to the Hammers would see them suffer a record-setting fifth demotion, but the visitors are under pressure to deliver a result that could help protect their top-flight status; they’re currently hovering just three points above the drop zone, and are winless in eight league away games.

All eyes on VAR

Technology was at the centre of controversy yet again this week when the Premier League admitted to the BBC’s Match of the Day that incorrect penalty decisions had been made in three separate fixtures.

Tottenham were denied a clear spot kick in their 0-0 draw with Bournemouth, while Southampton and Manchester United were awarded penalties that shouldn’t have stood against Everton and Aston Villa respectively.

Needless to say, the head honchos at Stockley Park could do without any more outrage being directed their way over the weekend.

Europe on the line in North London derby

It’s not been a season to remember for Arsenal or Spurs, but the winner of their clash on Sunday afternoon will take an important step towards salvaging something from the campaign.

The Gunners go into the game one point ahead of Jose Mourinho’s side, and just two away from the top six.

Champions League qualification, or even a top five finish, looks highly unlikely for either North London side at this stage, so the pressure is on for two sides accustomed to European football to make sure of a Europa League place – and thwart their rivals in the process.

A big weekend for the top four race

Let’s be honest, the Champions League race is the most exciting storyline left in the Premier League as we enter the final few rounds – and this weekend is massive in that regard.

Leicester are desperately trying to cling onto the top four spot they’ve occupied for so long, but they've mustered just one win in five matches since football’s return, and face a trip to a Bournemouth side desperately looking to dodge the drop on Sunday night.

High-flying United are breathing down the Foxes’ necks, sitting one point behind them in fifth, and can capitalise on any Leicester slip-up when they welcome Southampton to Old Trafford on Monday.

If Villa are to launch a late survival bid, it surely has to start on Sunday afternoon, when Crystal Palace visit Villa Park in one of their two remaining home games – the other being against Arsenal.

There is a four-point gap between Dean Smith’s side and West Ham and Watford. Villa have shown few signs of embarking on a winning run lately, picking up one point from five games, but if they can close the gap with a win over the Eagles, their away trip to the London Stadium on the final day of the season could become a winner-takes-all showdown.

United are the most in-form side since the restart, winning four games from five, and 18-year-old Greenwood is arguably their most electrifying player.

The youngster has bagged four goals and an assist in his last three games, including a thunderbolt against Villa in midweek, and Ole Gunnar Solskjaer has admitted he “cannot leave him out” at the moment.

Greenwood’s form this season puts him in some celebrated company; his 16-goal haul puts him one strike away from equalling George Best, Wayne Rooney and Brian Kidd as the teenager with the most goals in one season for the club.

Burnley’s push for European qualification faces a massive test when they face the champions at Anfield on Saturday afternoon.

The Clarets have pushed to within three points of the top six after three wins in four games, but they face an almighty challenge to topple a Reds side with ambitions of their own.

The long-awaited Premier League title may be in the bag, but Jurgen Klopp’s side know that winning at least three of their four remaining games will see them set a new points record, while they can become the first team since Sunderland in 1892 to win every home game in a season.

Only Manchester United have returned to action in better form than Chelsea, but the Blues’ Champions League place is still far from secure.

Frank Lampard’s side have leapfrogged Leicester into third place, but with just two points separating them from the Red Devils in fifth, there is little room for a slip-up during the season finale.

A trip to Sheffield United has banana skin potential, as Chris Wilder’s side have European aspirations of their own – they are currently one point away from marking their return to the Premier League with a remarkable top six finish.

COMMENT What's going on with VAR? Why the system isn't helping itself against accusations of bias