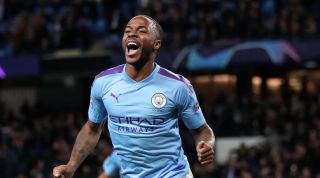 Disclaimer: This list only features wide attackers or second strikers, so the likes of Cristiano Ronaldo, Harry Kane and Luis Suarez aren’t eligible. The world’s best strikers are coveredhere.

Son has developed into one of Europe's most fearsome forwards in the last few years. The South Korean was a key part of Tottenham's run to the Champions League final last term, scoring four goals and providing an assist to go with 12 of the former and six of the latter in the Premier League.

Quick, intelligent and a fine finisher with either foot, Son is devastating in transition and increasingly adept at helping Spurs break down deep defences. He's been directly involved in 10 Premier League goals already this season, as well as scoring five times in five Champions League outings.

Sancho took a risk when he decided to swap Manchester City for Borussia Dortmund in 2017, but his choice has paid off spectacularly. The England international was the breakout star of European football in 2018/19, scoring 12 goals and providing 14 assists as BVB pushed Bayern Munich all the way for the Bundesliga title.

Sancho has started the current campaign brightly, but reports suggest he won't be at Signal Iduna Park at the start of next season. Every major club in Europe would welcome the 19-year-old, who combines terrific dribbling skills with polished end product in a manner seldom seen in someone so young.

After a summer dominated by speculation about his future, Neymar has knuckled down at the start of 2019/20, scoring four goals in six Ligue 1 appearances and once again proving that, for all his unwelcome antics, he's one of the most talented footballers of his generation.

A phenomenally gifted dribbler who beats opponents for fun, Neymar is a devastating and highly influential attacker with the numbers to back it up: the former Barcelona man has scored 55 goals in his 65 games for PSG, and only Pele and Ronaldo have found the net more often for Brazil.

Having committed his future to Atletico Madrid in summer 2018, Griezmann changed his mind a year later and sealed a move to Barcelona. He hasn't exactly hit the ground running at the Camp Nou as Ernesto Valverde attempts to balance out a star-studded attack, but there's no question that the France international remains a top-class forward.

Technically gifted and adept at both creating and converting chances, Griezmann also possesses an admirable work ethic, which is why he was such a success under Diego Simeone. Having helped his country win the World Cup last year, the 28-year-old look set to be France's main man at next summer's European Championship too.

A pacey, direct runner with the ball at his feet, Mane commits defenders and opens up space for others with his sharp movement in and out of possession. His shooting is excellent, combining power and precision, while his regular stream of assists have helped keep the most dangerous frontline in English football firing.

Sterling enjoyed the best season of his career in 2018/19, scoring 25 goals and setting up another 15 for Pep Guardiola’s trophy-guzzling Manchester City. There was a time when the former Liverpool's man finishing let him down, but he's increasingly reliable in and around the penalty area, where his first-class movement usually gives him the edge over opposition defenders.

Sterling also offers plenty outside the 18-yard box, with the England international adept at beating full-backs with either pace or trickery. The forward has refined his game under Guardiola, and it's scary to think he's still only 24.

There haven't been many more spectacular debut seasons than Salah’s in 2017/18. Signed from Roma the previous summer, the Egypt international plundered 44 goals in all competitions as Liverpool finished in the top four of the Premier League and reached the Champions League final, in which an early injury to their star man severely damaged their chances of victory.

Salah made up for that near-miss last term, scoring in the 2-0 victory over Tottenham that confirmed Liverpool as European champions. He's no less integral this season as the Reds attempt to win their first league title since 1990, a cause to which he's already contributed six goals and three assists. Defenders know that the Egyptian invariably wants to cut inside onto his left foot, but stopping him is another matter entirely.

It would be disrespectful to call the Chelsea of 2018/19 a one-man team, but there's no doubt that Hazard was central to the Blues' top-four finish and Europa League triumph. His 21 goals and 17 assists in all competitions cemented his status as a Chelsea legend, while also earning him a dream move to Real Madrid in the summer.

Hazard's output in the Spanish capital hasn't yet matched the standards he set in west London, but it's surely only a matter of time before the Belgian recaptures his best form. With wonderful trickery, balance and acceleration, the 28-year-old is simply too talented not to be a success at the Santiago Bernabeu.

Mbappe was a household name before 2018 got underway, but the last couple of years have seen his stock rise even higher. After helping PSG claim another Ligue 1 crown with 13 goals and eight assists, the France international was key as his country won the World Cup in Russia, delivering one of the tournament's best individual displays in the last-16 victory over Argentina.

Mbappe followed that up with an astonishing 33 goals in 29 Ligue 1 appearances in 2018/19, while he's already found the net four times in the Champions League as PSG target European glory this season. Blessed with extraordinary technical and physical gifts, the 20-year-old is surely a future Ballon d'Or winner.

Who else? Arguably the world’s best passer, dribbler, creator and finisher, the tag of ‘forward’ feels insufficient for a player of Messi’s unparalleled genius. The Argentine is the most complete footballer around, able to score, assist and control the tempo of a game – usually doing all three within the space of 90 minutes.

The Champions League has eluded him since 2015 and his list of international honours remains empty. Yet that doesn’t diminish Messi's standing – he’s still won Europe’s foremost competition three times, after all – or negate his strong claim to be the greatest player of all time.

READ THIS Lionel Messi wins the 2019 Ballon d'Or: How we've followed the best player of the last 25 years

The 10 best strikers in the world

The 10 best centre-backs in the world