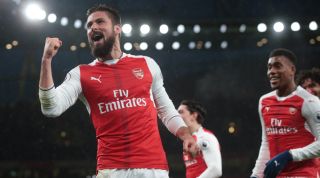 Who's the most efficient attacking force in the Premier League? Here’s a clue: he plays for Arsenal. Is it Mesut Özil? Nope. Alexis Sanchez, then? Well, the Chilean has notched more goals and assists this season than any other player, but we’re talking here about the one who contributes to a goal most regularly – and there’s another Gunners forward who tops the list.

As some of you may have guessed, the answer is Olivier Giroud; Arsenal’s oft-mocked, much-maligned centre-forward.

The elegantly coiffed Frenchman has been part of the supporting cast for most of the season, waiting in the wings for his chance to make a grand entrance. But when that moment comes, he swoops dramatically onto the stage, bringing the scene alive and drawing pantomime boos from the audience.

As of January 20, the 2016/17 Premier League campaign is 21 games old and Giroud has played precisely 500 minutes of it. He's spent less time on the pitch than 256 of the league’s other players, from Spurs misfits Moussa Sissoko and Vincent Janssen to Stoke’s Peter Crouch, who’d been presumed dead by most fans before his recent resurrection. Yet in that time, the Arsenal striker has chipped in with seven goals, three assists and at least one unseemly goal celebration.

But who else is proving surprisingly effective going forward? And which superstars aren’t scoring or creating a goal often enough? We’ve calculated how long it takes each Premier League player to register a goal or an assist, to root out the frauds and dish out some awards.

Disclaimer: statistics below may not be a full representation of a player’s quality. Performances can go down as well as up. Satisfaction is not guaranteed in this life.

When we did this 11 months ago, we noted that, “Even if goals aren’t everything, it’s surprising to see Alexis Sanchez scoring or creating one only every 200 minutes, a worse ratio than Jordan Henderson and Arouna Kone among others.” Maybe we have ideas above our station, but Sanchez clearly read our blog and is setting us right.

The ex-Barcelona man is the league’s leading producer of goals this season, creating or converting them at a rate of one every 85 minutes. While you may well expect a player of his calibre to average a goal or assist per game, you’d be surprised by the truth: last season only supersub Kelechi Iheanacho came in at sub-90 minutes, while Sanchez himself ended the season with a score of 144MpGA (Minutes per Goal/Assist).

Iheanacho’s up there again this term, his 67MpGA for seven goals and assists putting him second behind Giroud and his ludicrous average of 50 minutes per contribution. The pair’s efficiency brings to mind the timeless supersub debate: do Giroud and Iheanacho deserve to start more often, or does their success show simply that they are best used from the bench?

Either way, we reckon Giroud keeps an eye on his stats: in Arsenal’s 4-0 win at Swansea last week he apparently noted his MpGA rising from 49 to 50 and departed with a mysterious injury in order to protect his record. Crafty.

Generally, though, regular goals make for regular starts, and it’s no surprise to see Diego Costa and Harry Kane proving themselves to be two of the Premier League’s most reliable attacking threats. Both strikers average a goal or assist per game and are among the most productive players overall, either side of fellow goalsmiths Romelu Lukaku and Zlatan Ibrahimovic.

The Swede, in particular, is really sticking it to his English critics: despite being 35 and making his first foray into a famously physical league, he's played every minute of this Premier League season except for the 90 where he was suspended. YouTube footballer, huh?

You can also see how well Mauricio Pochettino and Jurgen Klopp improve their players. Dele Alli and Christian Eriksen are averaging a goal or assist every 1.5 games, and the nine contributed by their Spurs team-mate Son Heung-min have come every 108 minutes, while at Liverpool, Sadio Mané has been a near-constant threat, Philippe Coutinho is making a goal every 100 minutes and Adam Lallana is in the form of his life, having an impact on the scoresheet every 107 minutes (compared to every 211 minutes last season and 224 the year before that).

It’s interesting, too, that while Costa and Eden Hazard lead the way for table-toppers Chelsea, there are few slouches in Antonio Conte’s team. Pedro has played a part in 10 goals at a rate of almost one per full game, while Cesc Fabregas has played only eight hours of football all season, yet five assists and a winner against Sunderland mean he's involved in a goal every 82 minutes. Even Nemanja Matic has laid on six goals, and he’s basically a boulder with a face drawn on it.

Next: Who's top of the flops?

One name sits oddly in that table above. It’s not Jermain Defoe, although he is the only Sunderland player to have registered more than a few goals or assists – a mere four is enough to make full-back Patrick van Aanholt his nearest rival.

No, the surprise package is surely Matty Phillips. The winger’s £5.5m transfer from Championship strugglers QPR to Premier League makeweights West Bromwich Albion (yes, yes, we know they’re eighth) was met with a collective shrug, but Phillips has done Tony Pulis proud; only Kevin De Bruyne has delivered more than his eight assists.

Phillips isn’t the Premier League’s only unsung hero. Bournemouth's Junior Stanislas has an average of 108MpGA. That tops even Sergio Aguero, whose 11 goals at 112MpGA is poor by his own sky-high standards, following a prolific three seasons from 2013/14 to 2015/16 that brought 83 goals or assists at an utterly absurd ratio of one every 78 minutes.

As well as Phillips and Stanislas, credit is due to Swansea’s Leroy Fer and Crystal Palace’s James McArthur, both central midfielders at relegation-battling clubs but each involving themselves in a goal once every two games. Meanwhile, Hull would be in even bigger trouble without Robert Snodgrass being responsible for 10 goals.

And let’s hear it for the largely unheralded Charlie Daniels. Bournemouth’s left-back had a hand in eight goals last season and has added another six in 2016/17, once every three games. We’ll even forgive him for wearing No.11 at full-back.

Riyad Mahrez, top of the flops

A few Premier League stars are underperforming this season. PFA Player of the Year Riyad Mahrez scored or assisted 28 goals in 2015/16 at a rate of 109MpGA, behind only Aguero and fellow Foxes forward Jamie Vardy among those with 10 or more goal contributions. The current season has brought only three goals (all from the penalty spot) and two assists – one every five hours. That’s fewer than Daniels, indeed. Vardy’s been almost as disappointing, participating in only seven. At least Leicester’s new boy, Islam Slimani, has delivered eight at an impressive 112MpGA.

Of course, the rate at which a player scores or sets up a goal isn’t the only indicator of their quality or worth. For instance, many would argue – and correctly – that David Silva contributes more to Manchester City’s attacks than just the final pass or shot.

And yet, is it churlish to expect more from a world-class playmaker than one goal and four assists in over half a season? The Spanish schemer averages 312MpGA, or a goal contribution once every three-and-a-half matches. Similarly, Everton duo Yannick Bolasie (out for the year, and finishes on 206MpGA) and Ross Barkley (211MpGA) could be more productive, and Gini Wijnaldum has more in him than a goal or assist every six-and-a-half hours, even in a deeper role.

Then there’s Özil. Like Silva, he often provides the ‘hockey assist’ – the pass before the pass before the goal – and being involved in eight goals before February is hardly terrible, so we don’t envisage this next sentence going down well among Arsenal fans.

However, we wouldn’t be doing our job if we didn’t point out that taking 188 minutes to score or directly create a goal makes Özil less efficient than the aforementioned Phillips, Stanislas, Snodgrass and Fer, as well as Crouch, Divock Origi, Ryan Fraser, Ashley Barnes, Andre Gray, Nacer Chadli, Christian Benteke and Alvaro Negredo, to name a dozen. Intriguing, no?

Now if you’ll excuse us, there’s a pitchfork-wielding mob outside.