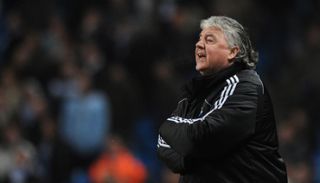 Kinnear was appointed at St James' Park after Kevin Keegan left the club in September 2008 but stepped aside in early 2009 due to heart problems.

"I wanted to get my teeth into something in the Premiership. I think I am ideal for this situation."

Kinnear, who won just five of his 24 Premier League matches in charge of the club, is best known for his expletive-ridden rant during his first news conference as Newcastle manager.

The former Nottingham Forest, Luton Town and Wimbledon boss swore 52 times at reporters who he felt had written negative and untruthful articles.