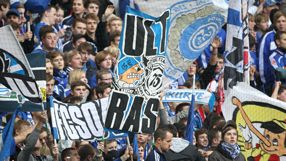 The Bundesliga champions said on Thursday that only scarves, hats and replica shirts would be allowed into the ground, saying the measure had been taken because Schalke's 'Ultras' used banned pyrotechnics at last November's meeting.

"All other fan instruments such as flags and banners should not be brought," said Dortmund in a statement. "The reason is the misbehaviour of some Schalke fans at the last derby in Dortmund."

Dortmund won both Bundesliga meetings between the sides last season.

German stadiums, where standing is still allowed for domestic games, are less sanitised than some others in Europe and provide a raucous atmosphere.

Dortmund's Suedtribune is the largest standing area in Europe with room for nearly 25,000 fans.