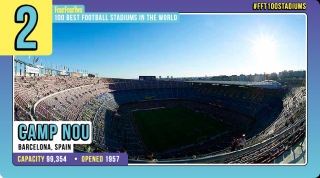 Ilusión was all Barcelona had in June 1950. A dream. Hope.

In the middle of Los Años de Hambre – the post-Civil War Hunger Years that consigned Spain to economic and near-literal starvation from 1939 until 1959 – the city was struggling. Despite being Spain’s most industrialised city, along with the equally separatist Bilbao in the Basque Country, trade restrictions meant Western Europe wouldn’t deal with right-wing fascist dictator Franco.

But in June 1950, Barcelona changed forever. In June 1950, Barcelona bought Laszlo Kubala. So good was the Hungarian forward, so many goals did he score, so much hope did he bring to a tortured region, that within four years a new stadium had to be built to accommodate all the fans who wanted to watch Kubala.

You might have heard of it. It’s called the Camp Nou.

Literally meaning ‘the New Field’ – the Catalans are noted for their parsimony: even their sardana national dance is little more than a sideways shuffle – the successor to Barça’s Les Corts ground soon became a hive of anti-establishment counter-culture.

If Barcelona are més que un club, then this has always been més que un estadi: more than a ground.

In an era when the Guardia Civil – the armed division of the Spanish police responsible for maintaining Francoist order, even through assassination – could arrest somebody for speaking Catalan in public, the Camp Nou became the only place where the regional language could be heard, out of earshot of the despised triangular-hatted authorities.

Cheering the home side in their shiny new stadium – which celebrated two Liga titles in its first three seasons – was the most common expression of anti-Franco protest.

Evolution has been key to the Camp Nou’s enduring allure ever since its inaugural 1957 friendly against Legia Warsaw began with a blessing from the Archbishop of Barcelona and a performance of the Hallelujah chorus from Handel’s Messiah.

Shown around Real Madrid’s Nuevo Chamartin (later to become the Bernabeu) in September 1953, then-Barcelona president Francesc Miro Sans – a pragmatic choice who to some extent had Franco’s ear during much of his presidency – was determined his own stadium would be bigger, better and more imposing. It certainly cost as much, going 336% over budget at 288 million pesetas (€1.3m in today’s money), roughly the same amount as the Bernabeu.

The risk worked. The Kubala effect was exactly as hoped and fans flocked to the new ground in their thousands. Thick-set, with unimaginably exotic – to Spanish eyes at least – blond hair, the Hungarian electrified the Camp Nou and was the spark that ignited Barcelona’s surge to a league and cup double in 1959.

“Technically, he revolutionised everything,” recalled team-mate Gustavo Biosca. “Our ideas and those of the whole of Spain.”

From Kubala to Cruyff

As the cult of Kubalismo faded into old age, the Camp Nou had to wait nearly 20 years for another foreigner to save the club. For the record, Johan Cruyff didn’t do a bad job at returning the Catalans to Spanish football’s summit, either.

With Cruyff, the ilusión returned. Though a solitary Liga and Copa del Rey title may seem scant reward for a player (and later manager) who occupies such a lofty position in Barça-lore, the Dutchman’s presence was enough to warrant increasing the size of the stadium’s capacity and installing electronic scoreboards.

For the 1982 World Cup, the capacity was again raised to 121,749 – it currently seats 99,354, making it the biggest stadium in Europe – plus shiny new boxes and VIP lounges to ensure corpulent FIFA suits wouldn’t want for patatas braves or crema catalana (a sort of crème brulee).

Two years later came the opening of the club museum, the most popular such attraction in Catalonia. Since then little has changed, that reduction in capacity aside, though there are plans to increase that by around 5,000 from 2017. Crucial to the new plans, however, are the covers that will shelter the hardy fans peering from on high at the pin-sized players below.

This has always been the curious paradox with the Camp Nou. Frequently perceived as a cathedral of world football, three-quarters of it is open to the elements, while sitting in the top tier can be a strangely isolated and detached experience.

Yet the atmosphere and sense of occasion for big games, helped in the last 25 years by a footballing philosophy seldom replicated anywhere else in the world, never disappoints. Come Clasico day, everything from pig’s heads (calm down, Mr Cameron), to whisky bottles and enough loose change to finance a revolution will be found pitchside. The pre-game recital of the club anthem – which ends with a guttural “Barça, Barça, Baaaaaaaarça” – adds pomp and ceremony to the cavernous bowl.

More than a game

The stadium’s history extends beyond Barcelona. As the 1999 Champions League Final between Manchester United and Bayern Munich – 10 years after its first, a 4-0 win for Arrigo Sacchi’s Milan against Steaua Bucharest – entered injury time, die Roten’s president Uli Hoeness entered a lift to take him pitchside for his side’s imminent coronation as European champions.

In the three minutes it took him to reach the bottom, United had scored twice and won.

“The lift took a half-minute to arrive,” said UEFA president Lennart Johansson, who was accompanying Hoeness. “Then you had to go through a long hall, through several rooms and through the dressing-room area, and because we were inside, we never heard a thing. I then went out onto the pitch, and I was confused. I thought: ‘It cannot be: the winners are crying, and the losers are dancing.’”

Yet this is a ground that is bigger than even football. Pope John Paul II celebrated mass with a packed Camp Nou in 1982, while another infallible Messiah, Bono, has performed here with U2 three times.

Not bad for a ground that started as a dream.