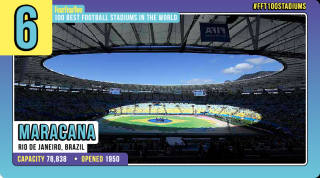 A synonym for grandness, Maracana has every right and credential to feel it is the greatest stadium in the world. No other football ground can claim to have received almost 200,000 paying spectators in one game. The 1950 World Cup final game against Uruguay set that record, almost matched by the 194,603 who came for the 1964 Carioca derby between Rio’s two most popular clubs, Flamengo and Fluminense.

If Brazil’s passion for football is known worldwide, it’s partly thanks to this football shrine that became a symbol of exquisite football perfected under dancing crowds, in competitions from the Carioca tournament, the Brasileirao, Copa Libertadores, to the World Club Championship, Confederations Cup and World Cup.

It’s known to everyone as Maracana, after a river that crosses Rio from the jungle-­covered hills of Tijuca to the Guanabara Bay; in the indigenous Tupi language, Maracana meant “parrot­-like”. Few people know that the stadium was officially named after journalist Mario Filho, founder of a local sports newspaper, whose influence was vital for its completion. But Maracana is also known for a twist of its own name, Maracanazo – the biggest Brazilian football tragedy.

How Maracanazo shaped a nation

What does Maracanazo mean? Figuratively translated as “the big blow of Maracana”, it reflects the national tragedy of losing that final 1950 World Cup game against Uruguay.

It was only the fifth game staged at the stadium, and almost 200,000 Brazilians had come for a coronation. Commanding his men to ignore the crowd, Uruguayan captain Obdulio Varela coined a football phrase: “Los de afuera son de palo” (“Outsiders don’t play”).

Even when Brazil went in front, Varela took the lead, purposefully delaying the restart by arguing with the English referee. When Uruguay equalised, Brazil worried; when Alcides Ghiggia scored, the game was over.

The legendary defeat of 200,000 Brazilians by 11 Uruguayans marked the end of Brazil playing in white – by the next World Cup they had switched to the famous yellow, blue and green – and condemned goalkeeper Moacir Barbosa, held responsible for the decisive goal, to a life of contempt. Barbosa had thought Ghiggia was about to cross the ball, but instead, he took a shot, instantly silencing the crowd.

The Maracanazo curse had a terrible effect on Barbosa, who was shunned in bars and cursed in the streets. In 1963, desperate for redemption, he got hold of the Maracana’s old square wooden goalposts and burned them, but that didn’t free him. As he said at the turn of the century: “In Brazil, you get 30 years for murder, but I’ve been serving 50 years for a crime I didn’t commit.” It’s the saddest story of the Maracana.

The stadium’s location was controversial, to say the least. Congressmen argued over the location for the ring-­shaped centrepiece stadium of the 1950 World Cup. In the end, rather than being built in a neighbourhood, the stadium has helped to build a neighbourhood. Now, Maracana is the stadium, the surrounding area and a very convenient metro stop.

It was built quickly rather than brilliantly. At the first games, there were no toilets or press box. And within four decades, portions of its structure were falling apart within four decades. Despite works done in 1985 and 1991, there were real concerns about the substructure being affected by the humid weather, poor maintenance and even decades of the fans’ urine in the cement.

“Everything was really dated and old,” recalled Flamengo player Wilson Gottardo. “In the dressing room, when you took a shower, the water was full of impurities. There was a strong smell of humidity. It was clear that something wasn’t right.”

In 1992, during the Brasileirao final between Flamengo­ Botafogo, with anywhere up to 150,000 people jumping in the stands waiting for kick-off, part of the home end collapsed and more than 50 spectators fell from the upper tier, a catastrophe that ended with three dead.

Incredibly, the match was played. “They only told us that something serious had happened,” said Wilson Gottardo, “but that the game was very important and couldn’t be suspended with so many people in the stands, but didn’t give us details. I had my whole family in that home end.”

Flamengo’s 3­-0 victory marked the end of the multitudinous Maracana, which was closed for seven months and re-opened with its capacity dramatically halved. Maracana has its own king, Zico, who scored 333 goals in 435 games there, and deservedly has his own statue. And if you really think Pelé scored more than 1,000 goals, then you’d better believe that his thousandth was scored here, on 19 November 1969.

The guided tour offers the chance to see the original 1962 kit of Garrincha (another Maracana hero), the chair where Queen Elizabeth II once sat, the crossbar Pele’s 1,000th goal went under – and the sculptured feet of Vasco da Gama idol Roberto Dinamite. Since 2007, former FIFA president Joao Havelange had been insisting that Maracana should be demolished, despite a 1998 ruling decreeing it a national landmark. Instead, it was extensively remodelled and hosted the 2014 World Cup Final between Germany and Argentina. It will also be used for the opening ceremony of the 2016 Rio Olympic Games.

The revamp, after three years of works, ended up costing more than building a new stadium: almost $500m for what is now an 80,000­ seater, completely different to the old model. The shallow two-­tier set­-up is now a single­-tier stadium with a more pronounced slope and better visibility. It re-opened in June 2013 with the international friendly between Brazil and England.

With about 1,500 solar panels installed on the completely new roof, the Maracana is proud to have turned into the greenest stadium in Brazil, with the capability of producing its own energy, and even saving some electricity passed to the city. Fans now enjoy 60 bars, 292 bathrooms, 17 lifts and wheelchair access. Dressing rooms were also completely re-thought: now there are four, each with its own warm­-up zone with artificial grass, so the players can also use footballs in exercises.

Originally built for a World Cup that ended in emotional disaster, and built so badly that it ended in actual disaster, the Maracana has been so extensively rebuilt that it is now barely the same stadium. But it retains its iconic status through its ringed roof, its ambience and its history. And that’s more than enough to pay a visit.