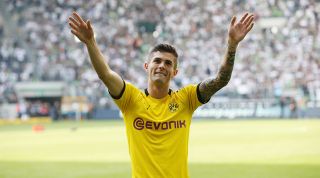 It began with three. Two of them, in fairness, had spent years in English football before the Premier League was born – but nonetheless, just a trio of Americans lined up during the first campaign of 1992/93.

Since then, 43 men have represented the famous stars and stripes in England’s top flight – with all but eight of those qualifying for today’s quiz. You’ll thank us for not including one-appearance wonder Johann Smith, who turned out for Bolton in 2006/07.

As Christian Pulisic aims to make an immediate impression for Chelsea in 2019/20, we’re looking for his fellow countrymen who’ve played at least 10 games in the Premier League since 1992 – at least 97% of whom have played for Fulham, apparently.

Since it’s quite tough, we’re adding a bit of extra time on the clock; so nine minutes for this one. After you’re done send us a screenshot for proof of score to @FourFourTwo and we’ll retweet some of those with no spoilers. G’luck!

QUIZ! Can you name the 50 most recent Premier League managers?