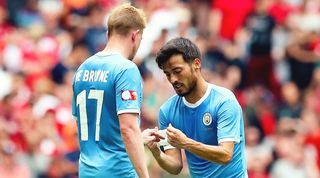 Ten minutes on the clock, 58 players to guess.

NOW TRY Quiz! Can you name every nationality in the Premier League?

Captains aren't what they used to be - according to many, at least.

While some picture the likes of Roy Keane, Tony Adams and John Terry like army generals on the field, that's not the only kind of skipper. There are quieter kinds who lead by example too. David Beckham is a big example for England.

It may not be as important as it used to be to have a designated leader on the pitch - really, it's good to have three or four - but it's still an honour either way to receive the captain's armband.

58 players have had the privilege this season in the league - can you name them all?