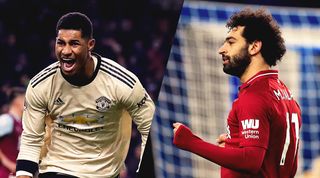 Fancy getting a shirt signed by Jordan Henderson, Marcus Rashford, or Raheem Sterling?

What about if it only cost you £5?

The largest signed shirt giveaway in football history is taking place this week, giving fans the chance to win shirts signed by their favourite players from any Premier League club, including Arsenal, Chelsea, Liverpool, Manchester United and Manchester City, for just a few pounds – all while raising money for NHS workers.

The Shirts for Heroes raffle, organised by #PlayersTogether – an initiative led by Premier League players to support frontline NHS workers, volunteers and patients during the coronavirus crisis – sees fans able to choose which Premier League player they'd like and purchase a ticket through eBay for just a fiver.

Even better, supporters can see how many tickets have already been sold for each player – meaning those who are less picky about whose shirt they'd like can increase their chance of winning. Good luck if you fancy winning Virgil van Dijk's, though...

For those who fancy spending a bit more, there's also an option to buy a ticket for the whole squad for the club of your choice – entering you into the raffle for every player.

The online-only raffle – which you can enter here – is open until Sunday, June 14, with winners selected at random, and announced by July 1.

The money raised will go directly to NHS Charities Together, the national membership organisation for NHS Charities, representing more than 200 member charities.

Announcing the fundraiser, players from #PlayersTogether said: "As players, we have been determined as a group to help in any way we can.

"That’s why we established #PlayersTogether to raise much needed funds for front line carers through NHS Charities Together.

"This is a player led-initiative, working together collaboratively across all clubs and we are delighted to team up with eBay to offer our signed shirts in the Shirts for Heroes campaign. We hope this is something all fans up and down the country can get involved in and help us raise money to make a difference for the real heroes of this crisis."