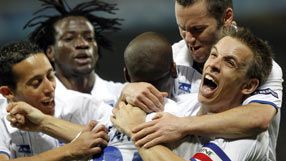 Auxerre, who had a miserable start to the season, snatched their fifth win in six matches in all competitions thanks to goals by Benoit Pedretti and Dariusz Dudka.

Captain Pedretti put the home side ahead from the spot in the 16th minute after Sylvain Marchal handled.

Dudka then doubled the lead four minutes into the second half after Roy Contout was brought down by Josuha Guilavogui.

The draw for the January 18-19 semi-finals will be made after Wednesday's matches.

The final is to be played at the Stade de France on April 23.