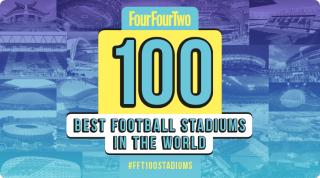 Union Berlin’s brilliant ground won’t be winning architecture awards, but you can’t design charm like this. Nestled in a clutch of forest in Germany’s capital city, the second-tier side’s home has gone through some rough times: in 1966 it was expanded to its current capacity, but the club couldn’t afford its upkeep in the underdeveloped East Germany and only in 2008 – long after the nation’s reunification – was its cinder terracing replaced with concrete, a roof built, undersoil heating installed and a modern scoreboard introduced.

But that was no ordinary building work: most of it was done with the help of around 2,300 Union fans who volunteered their services to bring their team’s stadium into the 21st Century. It’s those same fans who create a racket on matchdays, and who only three seasons earlier had donated their blood to raise the money required for a league licence.

Since 2003, meanwhile, the stadium has hosted its famous annual Christmas carol singing event. In 2014, fans were invited to bring their sofas to watch Germany’s World Cup-winning run. This, as you can tell, is no ordinary club – and certainly no ordinary stadium. – JB

I WAS THERE: “You might feel like you’re going to disturb a German pensioner when you walk down the cobbled path towards Union’s cottage-like ticket office, but you know you’re in for a unique experience. Upon taking my place on the terrace I was handed a red banner to unfurl when the players jogged out. The results? You can see below.”  – Joe Brewin, FFT's Digital Features Editor

American architecture has a different hierarchy to the Old World, but by any standards the Rose Bowl is a grand old stadium. A US National Historic Landmark finished the year before Wembley first opened, it’s a vast coliseum of a place capable of packing them in: north of 90,000 witnessed Mexico’s recent win over USA in the 2015 CONCACAF Cup.

In some ways its size counts against it: although the NASL’s Los Angeles Wolves and MLS outfit LA Galaxy have been tenants, they understandably struggled to fill it. It was built for, and ended up giving its name to, the huge events which came to be known as “bowl games” (Super Bowl, etc); it also hosted the finals of two World Cups (1994 men’s, 1999 women’s) and the 1984 Olympics football tournament.

Playing an important role in the history of various American sports, the Californian coliseum was the site of the 1993 Super Bowl before which the late Whitney Houston sang what many believe to be the best live performance of The Star-Spangled Banner, in no small part to the beautiful surroundings. – KH

Another of Portugal’s Euro 2004 venues, Lisbon’s José Alvalade stadium is big on aesthetics. A mosaic multi-coloured design runs through the whole complex, inside and out, bar the green-painted undulating single roof supported at each of the four corners by cables streaming down from massive metal pillars piercing far into the sky.

The stadium’s inaugural match on 6 August 2003 proved a famous occasion, with the hosts beating Manchester United 3-1 in a pre-season friendly and an 18-year-old Cristiano Ronaldo putting in a mesmerising performance that would persuade Alex Ferguson to take the Portuguese magician back with him to Old Trafford as he began his ascent towards global superstardom.

The facility as a whole is much more than a football stadium, with an incorporated multi-sports pavilion, swimming pool, health club, clinic and shopping centre, making it a hive of activity not only on matchdays. – TK

It may be built on an old rubbish tip but there’s nothing trashy about this stadium on the banks of the mighty Han River and overlooking the world's highest fountain. Alex Ferguson waxed lyrical about it in 2009 and the image of Papa Bouba Diop dancing round the Senegal shirt in that opening game of the 2002 World Cup still sizzles on the French football psyche.

Modern, futuristic even but with a nod to the past and a design said to be based on traditional Korean kites, the stadium layout keeps the fans close to the pitch and the sightlines – so the experts say – are perfect from each of the 66,000 seats in the football-only arena.

When it’s full and South Korea are on form, the atmosphere can be something special – and even if it isn't, you can escape to a state of the art cinema, a massive supermarket, get married or go to a 2002 World Cup museum. – JD

One of England’s grandest old grounds, Villa Park has hosted the Football League founder members since 1897. Its impressive facilities, and central location, have long rendered it a favourite venue for major events; originally incorporating a cycle track and hosting athletics meetings, it has more recently featured boxing, rugby league and rugby union.

It has been a home from home for England – tellingly, it was the Three Lions’ first port of call after the old Wembley was demolished, and when Wembley was unavailable for the 2012 Community Shield the FA happily relocated it to Birmingham.

The last ever Cup Winners’ Cup Final was held at the venue in 1999, as well as Euro ‘96 and World Cup ‘66 fixtures. No fewer than 55 FA Cup semis have also been staged there – not all of them involving Ryan Gigg’s chest-rug.

The huge two-tiered Holte End (with attractive brick facade) traditionally holds the most raucous Villa fans, while the Doug Ellis Stand to the east is named after the former club chairman. Opposite that is the Trinity Road Stand, said to be renowned stadium architect Archibald Leitch’s finest achievements, with stained glass windows, Italian mosaics, Dutch gables and a sweeping staircase. It was demolished in 2000; according to stadium historian (and Villa fan) Simon Inglis, "the landscape of English football will never be the same." – GM

If you’re going to knock down the country’s oldest and most revered stadium, you’d better make sure you make a good job of the new one. Thankfully the new San Mames – named after a nearby church of the same name – is every bit as impressive as the magnificently intimate original, nicknamed The Cathedral.

What makes it unique is its position within the city. Lying on the banks of the Nervion River, San Mames is Bilbao’s beating heart, gridiron arterial streets expanding out across the one-club city. Walk along Calle de Rodriguez Arias or Poza Lizentziatuaren Kalea and the ground stands proud at the end.

Home to friendlies played by the Basque Country’s unofficial national team, San Mames is the physical representation of a people. – AM

This stadium is so big that construction also included a contingency plan for low attendances: every seat is painted in a different colour, so the stands never seem empty.

The two tiers are completely different, offering a unique view of what it looks like to combine two stadiums into one. A mix between Bombonera, Giuseppe Meazza and Camp Nou, this stadium bears a regular lower tier of cheaper ‘popular’ tickets, for nearly 60,000 fans, and a second, vertical tier for suites that allocates 20,000 more. The result is a monster ground that resembles those of the NFL, a very ambitious project that Universitario are still trying to pay for.

Modern and safe, it claims to have a state-of-the-art security system, including a face detection system for ultras in every gate, which is extremely helpful for the fierce Universitario vs Alianza Lima derby. – MM

Officially it’s known as the Stadion Rajko Mitic in honour of a club legend, but Red Star’s stadium has long been nicknamed the Marakana after – yes, you probably didn't need us to spell this out – the Maracana in Rio. Switching the 'c' for a 'k' was a nice touch.

The Belgrade version is an imposing old-school bowl and was a particularly taxing place to visit during Red Star’s heyday – 100,000 were there when they beat Bayern Munich in the semi-finals en route to European Cup glory in 1991. The stadium also hosted the 1973 European Cup final and the final of the 1976 European Championship, won by Czechoslovakia thanks to Antonin Panenka’s Panenka.

Red Star’s decline in fortunes have meant it isn’t full that often these days, but the atmosphere is still pretty special when it is – albeit sometimes with a rather significant hint of menace.

It’s home to the fearsome Delije, the Red Star ultras from whom Arkan recruited paramilitaries for the fight against Croatian independence in the early 1990s. In one match against Partizan, those paramilitaries returned to hold up Croatian road signs to chillingly celebrate their capture of a number of towns. A Red Star fan, Arkan lived in a villa overlooking the Marakana until he was assassinated in 2000. – CF

Not too many of those wondering if the heat will be an obstacle for Qatar’s hosting of the 2022 World Cup have visited the Jassim bin Hamad in Doha. If they had, they may have been left shivering along with those thoughts at the planet’s first air-conditioned venue, where the technology has been in place since 2008.

Strolling in from the heat of a Doha day (where temperatures can nudge 50C or 120F),  many spectators have been known to long for a coat as the cooling technology can allow the temperature to dip more than 30C below the outside conditions. The way the technology was designed is also nifty: the array of small footballs around the edge of the stands aren’t merely for design, they are the air-conditioning ducts that blow the cooled air onto the venue.

While it’s probably not a poster-child for global warming, the compact stadium was one of the key advantages Qatar had in selling their 2022 bid, cooling concerns that players would collapse in the heat. The de facto home for the Qatar national team – not to mention Al-Sadd, currently captained by Barcelona legend Xavi – it also hosted the 2014 Italian Super Cup and was a venue for the 2011 Asian Cup. – SM

A newbie, but a goodie. The Turk Telekom, despite its ugly name, has achieved the near-impossible of living up to the legendary home it replaced. Gala’s old Ali Sami Yen was much-loved, placed at the heart of its support base, and highly intimidating for visiting teams, but quite frankly was a health hazard: the company that demolished it in 2011 stated that it was a near-miracle that it hadn’t collapsed.

The club wanted to rebuild on the same site, but after years of logistical wrangling, finally accepted that going out of town was the only option. The TT’s location, stranded in a business district on Istanbul’s northern edge, counts against it: there’s not much to do around the arena.

But it’s certainly pretty – having been nominated for numerous architectural awards – and inside, it’s a belter that has somehow translated the old firecracker passion-verging-on-mania atmosphere that has always made the club special. – NM